Vic Sotto will host Who Wants to be a Millionaire? on TV5 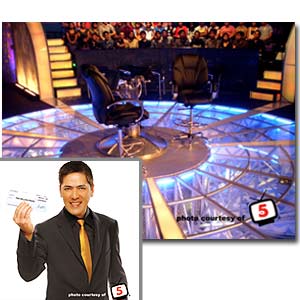 Watch Vic Sotto hosting his first game show via TV5's Who Wants to be a Millionaire? It airs its pilot episode on May 23, 2009.

When Christopher de Leon was still hosting Who Wants to be a Millionaire on IBC-13, Vic Sotto says that he kept close watch on the game show.

Given his affinity for the show, Vic Sotto did not hesitate to become the host of this game show, which now finds a new home in TV5. It will air its pilot episode of May 23, 2009 at 6 pm. WWTBAM is expected to last for two seasons on TV5.

Vic points out: "I believe Who Wants to be a Millionaire started it all sa new breed of game shows. Ito yung original na nagpamigay ng one million [pesos]. Everybody followed but of course, as they say, the original is always the best. And for me, it's still the best game show ever."

Did he talk with Christopher de Leon prior to accepting this hosting job in TV5?


Were TV5 executives inspired to do mount WWTBAM again because of the popularity of the movie Slumdog Millionaire?

"Oo, sa katunayan, the idea came up from the TV 5 people to get the franchise because of the success of Slumdog Millionaire. Ang producer [ng movie] yun ang producer din ng Who Wants to be a Millionaire."


Given the chance, would he produce a film that has a similar plot to Slumdog Millionaire?

MECHANICS. Based on the original British format, contestants coming from all over the Philippines will compete to get on the "hot seat" to which the ascent to the seven-digit jackpot begins by answering 15 multiple-choice questions correctly. Traditionally, Who Wants to be a Millionaire? is a general knowledge game show that sets off challenges, suspense, and a 1 million cash prize. But in the edition of TV5, the show escalates it to a P2 million jackpot prize, making the contestants eager and excited as the questions eventually reach higher levels of difficulty.

Staying loyal to its original format, contestants are provided "Lifelines" in the form of ‘Ask the Audience' at which the audience key in their answers, ‘50/50' wherein two wrong answers are eliminated from the choices, and the ‘Phone a Friend' option.

For its pilot episode this Saturday, May 23, Who Wants to be a Millionaire? has invited celebrities who want to become a multi-millionaire. Other game shows will usually feature only one or two celebrities as contestants, but to welcome the comeback of this game show on Philippine TV, it will be a star-studded premiere with celebrities Ara Mina, Polo Ravales, Assunta de Rossi, Rafael Rosell, Manilyn Reynes, Jay Manalo, Megan Young, Gladys Reyes, Nadia Montenego and Mo Twister—all vying to get on the "hot seat" and go face to face with Bossing Vic.

Find out who among these celebrities will have the chance to increase the "money tree" and reach the P2 million cash prize.


Watch Who Wants to be a Millionaire? starting off the Weekend Winners primetime belt and shaking your Saturdays every 6 p.m., only on TV5.