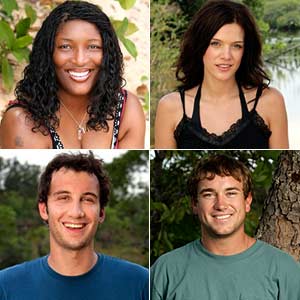 Who among J.T. Thomas Jr., Stephen Fishbach, Erinn Lobdell, and Taj Johnson-George will be the Sole Survivor in Survivor Tocantins? Find out when it airs on Q Channel 11 today, May 18.

With Benjamin "Coach" Wade failing to live up to his Dragon Slayer name, the quest to be this season's sole survivor is now down to the final four castaways—J.T. Thomas Jr., Stephen Fishbach, Erinn Lobdell, and Taj Johnson-George—as Survivor Tocantins reaches its finale this Monday, May 18, on Q Channel 11.


Last Friday's episode saw Coach getting sent to join the jury. After his last closest ally, Debbie Beebe, was voted out, Coach slowly realized that he's most likely the next one to go. With nothing much left to hold on to, Coach tried to draw some sympathy from his tribemates. He complained about having back pains and asthma, and hinted on how he doesn't want to be sent out to Exile Island.


In the Reward Challenge, it was Coach and J.T. who came head to head in the maze and game of pole construction. But it was J.T. who grabbed the overnight stay at the Governor's Retreat as reward. J.T. then chose Stephen to go with him and enjoy a treat to a feast, warm bed, and shower, and sent Coach packing for Exile Island.


At Exile, Coach vowed that he's going to take the "Monastic" approach by not building fire and not eating. And he did so, without any sleep even. But out of a log he made himself a cane, which actually became useful when he returned for the Immunity Challenge with a limp.


The Individual Immunity Challenge saw the castaways holding themselves up between door frames using only their arms and a foothold. Going down the door frame, the foothold became smaller and tinier. After Erinn, Stephen, and Taj dropped out, J.T. and Coach was one-on-one again in the challenge. After fifty minutes, Coach fell to the ground screaming in pain.


With Coach not safe at all from tribal council, J.T. and Stephen were torn on who to vote out—him or Erinn. J.T. reassured Coach that it was Erinn's time to go but Stephen was undecided. When the votes were read, it was three against two. Stephen joined Erinn and Taj in voting against Coach, making him the fifth member of the jury.