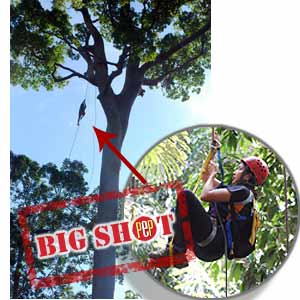 Kara David (in photo) climbs up 250 feet for the I-Witness documentary titled "Climbing the Manggis." It airs tonight on GMA-7.

This Monday, watch Kara David scale the tallest tree in Southeast Asia. The Manggis tree, called by the Palawan natives as "Ginoo" or Lord, earned its name due to its majestic height that reaches an average of 250 feet, taller than the GMA Network Building.


Towering over the tree canopies of Thailand, Malaysia, Borneo, Sumatra and Palawan, the Manggis' immense height and slippery bark serves as protection from predators, making it a favorite nesting place for several bird species including the hill myna, blue-naped parrot and Philippine hornbills. However, this has not stopped P'lawan natives from poaching the hatchlings of these birds and illegally selling them.


The natives' participation in the illegal bird trade started around 40 years ago with the lowlanders' incursion in the tribal communities. Lowlanders brought along with them sugar, coffee, cigarettes and other goods in exchange for native products like woven baskets, blowguns, honey and rootcrops. Up to now, the barter trade is still being practiced in the area. It is this simple trade that got some lowlanders started on the exploitation of the natives, convincing them to use their climbing skills to poach for hatchlings of unique birds and sell them in the cities as pets. Kara David shows us how the natives climb the tree's crown with the ingenious use of the "yantok" or rattan.


Kara also introduces us to some of the natives who became victims of this exploitation. She meets Pula Mindas, who learned to scale the Manggis trees from his father. He claims it was the lowlanders who told his father to poach for the bird trade. Today, he is one of the best poachers in his village. He gets P50 to P300 per hatchling, depending on the species. What he doesn't know is that the birds cost a lot more when sold in the cities, with prices ranging from P1,500 to P5,000.


Intol Tingkisan used to be a poacher but has since stopped after witnessing his nephew plunge to his own death while climbing the Manggis tree. Intol now earns from the salary he receives as warden for a foundation that has established a reverse to protect the birds against poachers. However, despite efforts of some NGOs and a few government institutions to stop the traders, the illegal bird trade continues to flourish, putting more natives' lives in danger.


Award-winning journalist Kara David exposes the dangerous lives that the P'lawan natives face in her documentary "Climbing the Manggis," airing this Monday midnight on I-Witness, after the late night newscast Saksi on GMA-7.