Karylle says she finally made her peace with Dingdong Dantes 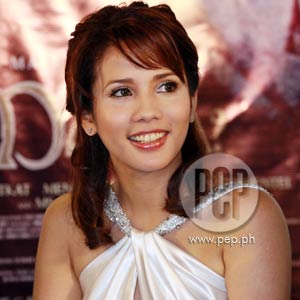 Singer-actress Karylle gets bombarded with controversial questions related to family and matters of the heart. She gets asked once again about her ex-boyfriend Dingdong Dantes and rumored girlfriend Marian Rivera, but this time she gives more than just a smile.


Karylle appeared on the May 17 episode of The Buzz to answer ten of the toughest questions she's faced so far in showbiz. The singer looked nervous albeit excited at the questions about to be thrown at her.


However, host Ruffa Gutierrez—who was the interviewer for this time—started out with a not-so-tough question. She asked, "I-rank mo ang most to the least important: Kagandahan, Kayamanan, Kaligayahan ng puso."

So what's the second?


The second question for Karylle in fact was a package of two. The first question was: When was the last time she felt giddy about a text message? The second (and probably most important) was from whom did it come from?


Does the guy's name start at the letter J?


OVER DINGDONG. The third question was related of course, to matters of the heart. Has Karylle moved on definitely and finally this time from her breakup with Dingdong Dantes?


After her answer, Karylle proceeded to explain that she was almost at the finish line of getting over him.


Since Karylle was almost over "him," is she now ready to fall in love again?


KISSING SCENE AS REVENGE? Karylle's latest movie Litsonero shows her having a kissing scene with co-star Paolo Contis. Since Paolo and Dingdong are best friends, how can Karylle permit that she kiss Paolo?


Litsonero will be screened in select cinemas starting May 20, 2009.


That said, Karylle moved on to answer the fifth question, which was: Would Karylle choose a loyal man or an honest man?


News has it that Karylle is being admired by guys in London. What is her say on this?


Is she open to dating foreigners?


ON MOMMY ZSA-ZSA. The next question for Karylle now concentrated on her mom, Zsa-Zsa. The question read: If there were anything Karylle would be sorry for to her mother, what would it be?


"Siguro in the past, my time na hindi ko matanggap ang mga nangyari so she would always be writing to me and calling me tapos hindi ko sinasagot tawag niya—and for that, I am sorry."


So are the two of them okay right now?

"Oo," said Karylle. "It was quite a childhood thing... I went through all the family healing thing and okay na ngayon. One of the big indicators na everything was going to be okay was when we went to Amanpulo for our first bonding trip with my two sisters Zia and Nicole. Para siyang paradise and heaven. Sabi ko nga sa mga tao na kung naging sad childhood mo, si God pag bumawi siya, He'll give you everything."


Karylle bluntly said, "Wala na, e. Siguro kamustahin ko lang. Before kasi we used to talk about our dreams and goals, so I'll just ask him on far along he is in reaching his dreams."


"I've already made my peace with him and everything that happened."


Well that kind of answer definitely deserves a final question laced with something—or someone—connected to Dingdong right now: Marian Rivera. If Karylle were to see Marian right now, what would she say?


"For me, nakausap ko na siya before," said the singer-actress. "And that was that. I said things that I had to say and I said all of it and it ended there. For me kasi, whatever I had to tell her, I told her so okay na."