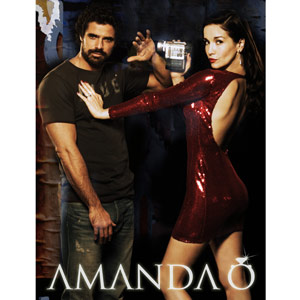 From the producers of the Argentinean telenovela hit Lalola come another romantic comedy that will surely glue viewers to their seats: Amanda O.


Set to premiere on Q Channel 11 starting this Thursday (May 28), Amanda O puts its mark on Philippine television's history with a couple of firsts - the first foreign television series dubbed in English and the first telenovela which will be made available to viewers in three platforms - television, internet, and mobile phone.


Amanda O, played by Natalia Oreiro, is fame immortalized. She is a renowned telenovela actress, a pop diva, and a certified newsmaker. Her face is not just seen on television but all over the tabloids as well, for she has become a paparazzi favorite. Amanda may detest all the made-up lies about her, but she is certainly used to it.


All that is precious to Amanda is her image, until she is accused of being a thief. Beleaguered, Amanda breaks down and wishes that she's somebody else.


And so it happens. Amanda wakes up in an unfamiliar place the next day bruised, battered, and disoriented. The next thing she sees confuses her all the more - another woman, not her, is on the poster of the new telenovela she stars in. Amanda makes her way home only to find out that the same woman now owns her life, her identity, and even her own name. No one, not even her own husband, recognizes her.


Hoping to regain her identity, Amanda uses cyberspace to re-introduce herself to the world. She captures the media's attention and her fans' sympathy through her blog and her funny videos, revealing even her innermost secrets.


Along the way, Amanda meets Dante (Luciano Castro), a mysterious man who becomes her only source of support. What role will Dante play in Amanda's new life? Will Amanda eventually fall in love with her unexpected savior? And ultimately, will Amanda regain everything she lost?