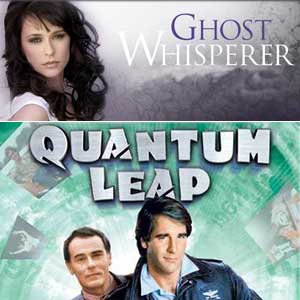 The classic sci fi show Quantum Leap and Ghost Whisperer are just some of the shows that will be shown on the Sci Fi channel (Cablelink channel 50 and Global Destiny channel 90).
Science-fiction and fantasy have been staples on primetime since the advent of fantaserye and telefantasya on local television. Shows like Darna on GMA-7 and Lastikman on ABS-CBN are not the shows usually associated with "sci-fi," but they are included in this widely popular genre. Now, Filipinos can enjoy classic and recent foreign science-fiction, fantasy, and horror shows with the launch of the Sci Fi channel on Cablelink channel 50 and Global Destiny channel 90.

Launched last May 15 at the A Venue Events Hall in Makati City, the Sci Fi channel is owned by NBC Universal Global Networks in partnership with local cable company Solar Entertainment. Solar is responsible for free TV channels ETC and 2nd Avenue and cable channel Jack TV, among others. Sci Fi is an international brand that was first launched in America in 1992. To be retooled in the U.S. this July as the Syfy channel to disassociate itself to the science fiction genre (as the channel is also a popular venue for popular foreign fantasy, action, adventure, and animated shows), Sci Fi brought to the TV screens now seminal science-fiction contemporary shows such as Battlestar Gallactica and Andromeda.

Tessa Paz Alviz, Solar Entertainment's brand marketing manager, said the country is ready for a channel devoted solely for science-fiction and fantasy. Solar Entertainment channels such as Jack TV and C/S Origins have been airing shows of the said genre, such as the recent Fox Television's Fringe and NBC's Heroes, but this is the first time a channel is devoted to the sci-fi/fantasy genre. She cited New World Alliance, a group of devout science fiction and fantasy fans, as well as the other groups devoted to fantasy books, movies, and comic books such as Twilight, Harry Potter, and Star Trek, as a sign that Filipinos have been interested in the genre for years.

"The Philippines has been waiting for a market like Sci-Fi. Meron nang core audience for sci-fi and I don't think they have a platform yet, so bringing Sci Fi here to the Philippines will reinforce that market, as well as bringing other people who don't know much about sci-fi," said Cora Adorador, network development manager for Sci Fi.

"Sci Fi is not just science fiction. It's the paranormal, it's fantasy, it's adventure, it's everything in between. So people need to realize that. And with Sci Fi here in the Philippines, they will be more educated in the genre."

The newest addition to Solar Entertainment will not be just "science fiction" per se, Adorador said. The local Sci Fi will air a number of the cable channel's original programming, such as the critically acclaimed Battlestar Gallactica and Andromeda. To fit the viewing preferences of the Filipinos, Sci Fi will also cater to shows that are not entirely science-fiction. Classic shows such as Quantum Leap and Star Trek: The Next Generation and contemporary favorites such as Angel, Eureka, Jeremiah, Ghost Whisperer, Mutant X, and Xena: Warrior Princess will be aired on Sci Fi.

Sci Fi's flagship show is Sanctuary, one of the channel's most popular original series. Garnering more than three million viewers when it premiered in the United States and Canada in 2008, Sanctuary is the channel's highest rated original show. Sanctuary is a science-fiction show from the creators of Stargate SG-1, and is the only show filmed mostly using a green screen. Instead of creating elaborate sets, Sanctuary uses CGI technology instead to recreate the imaginative fantastic backdrop of the show.

Alviz also said Sci Fi will shows in line the channel's genre. Movies scheduled to be aired on the channel include ABC Family's mini-series Samurai Girl, among others.