TV remake of Katorse to premiere on June 8 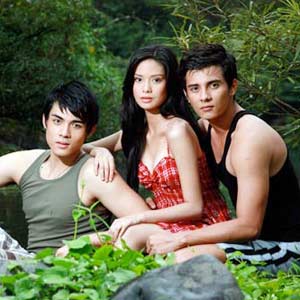 (From left) Xian Lim, Erich Gonzales and Ejay Falcon lead the cast of ABS-CBN's upcoming primetime series, Katorse. The series is a television adaptation of the classic '80s film topbilled by Gabby Concepcion, the late Alfie Anido and Dina Bonnevie.


Erich Gonzales waited patiently for years before landing her biggest break as an actress. Though not really wanting in projects since winning the reality talent search show Star Circle Quest in 2005, Erich's career took slow strides—defying initial high expectations coming from the public and industry insiders.

The television remake of the classic film originally directed by Joey Gosiengfiao looks perfectly tailor-made for Erich alone. For one, the 18-year-old actress's innocent aura complemented the coming-of-age theme of the movie.

Accepting the project, however, requires Erich to go daring this time. "I don't consider myself sexy at all," Erich candidly told the entertainment reporters last May 21 during a press conference prepared by ABS-CBN to promote its upcoming primetime show that will air its pilot episode on June 8, 2009.

Despite of her unassuming perspective of her physical self, Erich—who undoubtedly looks much prettier nowadays—decided to jump on the opportunity by accepting the project based merely on the strength of the material.


Under the direction of Malu Sevilla, she plays the role of Nene, a fourteen-year-old carefree teenager who has to face life's difficulty at an early age. Xian and Ejay portray brothers who are both in love with Nene but the young girl gives up her virginity to Ejay and she becomes pregnant with his child.

Serving as Erich's leading men are newcomers Xian Lim and Ejay Falcon. Both actors expressed gratitude for being entrusted by their home network with a big project.

For Erich, Katorse presents a big challenge as she portrays the character of Nene. The said role was played by Dina Bonnevie in the original version along with leading men Gabby Concepcion and Alfie Anido.

Now that she's officially in the league of young stars doing lead in a primetime slot, Erich said she welcomes the pressure with both confidence and humility.

Katorse will premiere on June 8 as part of ABS-CBN's roster of primetime programs.


Click HERE to view photos of the lead characters of Katorse.