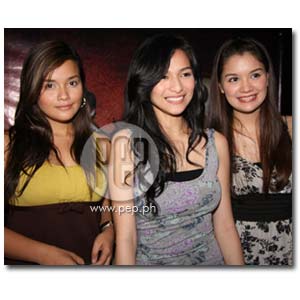 GMA Network's SRO Cinemaserye presents Suspetsa is a suspense-thriller that aims to keep viewers on the edge of their seats from start to finish.

Suspetsa, which is penned by seasoned scriptwriters headed by Jun Luna, is loaded with thrills and cliffhangers that promise to capture the viewers' imagination and interest up to the last episode. Every character is given equal premium, emphasizing further their acting skills.

The story centers on the lives of three women: the self-assertive probinsyana Nina (Jennylyn), smart yet bighead Leonor (Yasmien), and the lovely but feeble Abigail (Nadine).

The three childhood friends have kept their relationship intact and strong through the years. However, their bond is tested when Nina and Leonor saved Abigail from being raped by Chris (Ryan), the mayor's son. Nina and Leonor unintentionally pushed Chris from the bell tower during their fight.

Panic-stricken, they decide to abandon his almost dead body rather than report the accident. The news of Chris's death startles the three girls because he was still alive when they left him. Still, they pretended that nothing happened.

But five years later, someone begins pestering them. Anonymous messages are sent to the three, and they doubt whether someone else saw what they did to Chris or if Chris really died.

Thursday nights will never be the same again with the thrilling premiere of SRO Cinemaserye presents Suspetsa this Thursday, May 28, right after One Liter of Tears on GMA-7.