Two girls get the boot in "Philippines' Next Top Model" 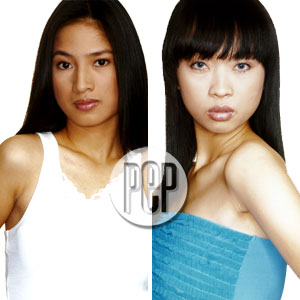 Marge Cornillez (left) and Sara Kae Custodio were both booted out during the pilot episode of Philippines' Next Top Model.

Philippines' Next Top Model (PNTM) made its television premiere on RPN-9last Tuesday, March 13.

The girls were brought to the PNTM house, where the girls will be living during the competition. The house is equipped with surveillance cameras to document the activities inside the house.

The 14 finalists were told to race to the house and to pick their own rooms. The catch: there are only 12 beds.

Two girls had to sleep in the living room.

BABES BIKINI. After getting settled, the girls received their first Ruffa Text—in ANTM, the girls receive instructions through Tyra Mail. The girls were told to put on their bikinis because they were going to have a bikini wax!

They had their own ways of stifling their screams. Some chose to bite on towels, while Mira, a student from Cainta, chose to munch on fruits.

After getting some shut-eye, the girls had a surprise visit from Joey Mead, Asia's supermodel/TV host.

Joey brought them to Rizal Avenue in Manila. The challenge was to pose in a bikini in front of hundreds of onlookers.

The crowd cheered and jeered at the girls while ace photographer Xander Angeles took pictures. Joey helped some of the girls to pose.

Mira, Rina, and Jayna got a thumbs-up from the judges for being "fierce." Mira and Jayna had model-esque poses, while Rina was praised for looking like a Brazilian model.

In the end, Marge and Sara Kae had the weakest pictures. Both got the boot!