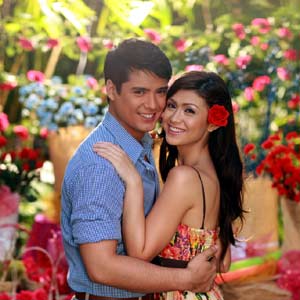 Geoff Eigenmann and newcomer Carla Abellana will give life to the local adaptation of Thalia's 2000 hit telenovela, Rosalinda.

The success of Marimar propelled Mexican superstar Thalia to the adulation and admiration of the Filipino audience when the phenomenal series was shown here in the Philippines in 1994.

But it was Thalia's last telenovela, Rosalinda, shown locally in 2000, that registered mightily in the rating contest and in effect cemented Thalia's hold among Pinoy viewers. Thalia and her programs have also shown that it can create a big star out of an adaptation. Marian Rivera best exemplified that when she bagged the right to portray Marimar in 2007, raising her stocks dramatically from a supporting actress to lead star status.

CARLA ABELLANA IS ROSALINDA. GMA-7 senior vice-president for entertainment Wilma Galvante needed only one glance of newcomer Carla Abellana in March to know that she found a diamond in the rough.

At the time, the Kapuso Network was busy looking for a fresh face to star in the local remake of Rosalinda. Needless to say, Carla's innocent appeal perfectly fits the character of the "simple, mabait, masayahin at ubod nang gandang dalaga." Despite her initial reluctance, Carla eventually relented and accepted the offer, making Rosalinda a make or break early career move.

"This is an opportunity of a lifetime," Carla offered confidently at the press conference held last June 30 at the Studio 5 of the GMA Network Center. "Ang laking blessing kay God, so bakit ko naman tatanggihan?"

The actor confided to PEP (Philippine Entertainment Portal), "Sobrang daming pressure with what people are expecting from the show. Pressure din with me kasi it's my very first big show with GMA si Carla din the same. Tapos sa character ni Fernando Jose ang daming preparations so sobrang dami. For me, character wise, Fernando Jose I guess is the darkest and most mature role I ever played so ang dami kong preparations na ginagawa. Of course, as much as possible I have to look good as the original Fernando Jose. Tapos yon nga he's a lawyer, he has a very dark past and he also plays the piano so I have to take piano lessons."

SHAKESPEAREAN PROPORTIONS. Rosalinda follows the tale of a simple, cheerful and stunning young florist named Rosalinda Perez. She will meet the handsome and wealthy lawyer Fernando Jose whose snobbish personality will soon melt after falling in love with Rosalinda.

The relationship was met with resentment and jealousy by Fernando's arrogant mother, Valeria (portrayed by Sheryl Cruz) and Rosalinda's envious sister Fedra (Katrina Halili). Despite these objections, Fernando Jose and Rosalinda tied the knot and set out to raise their own family.

But just as Rosalinda and Fernando Jose thought everything was going smoothly, the dark secret of the past started to cast a dim shadow in the relationship. It was then revealed that Rosalinda's incarcerated mother, Soledad (Glydel Mercado) was the one being accused of killing Fernando Jose's mother.

This revelation threatens to tear apart the fairytale-like union of Fernando Jose and Rosalinda.

Directors Maryo J. delos Reyes and Gil Tejada Jr. join forces to give life to the local version of Rosalinda. It will air on GMA-7 starting July 6, 2009.