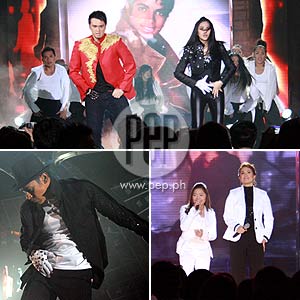 During the July 5 episode of ASAP '09, ABS-CBN stars joined forces in paying tribute to the late Michael Jackson. These included ASAP mainstays (top frame) Billy Crawford and Sarah Geronimo as well as Gary Valenciano (bottom left frame). Even their guests that day, Charice and Lea Salonga, made the it a point to dedicate songs to the King of Pop.

Last Sunday, July 5, the stars of ASAP '09 paid tribute to the late Michael Jackson as Kapmilya stars danced and grooved to King of Pop's famous hits. PEP (Philippine Entertainment Portal) was there when they dedicated different segments to the musical boy wonder who grew up to be a global pop superstar.

The seventh of nine brothers and sisters, Michael Joseph Jackson started his career as the youngest member of the Jackson 5. When he launched his solo career in the ‘80s and early ‘90s, he released a string of hits like "I Want You Back," "I'll Be There," "Billie Jean," "Heal the World," and "Black or White."

MJ also popularized dance moves such as the moonwalk, the anti-gravity lean and even the grabbing of one's chest and crotch. All these became part of the MJ-inspired dance numbers prepared by the ASAP ‘09 stars as well as their guests that day: Charice and Lea Salonga.

Yeng Constantino rocked the stage as she gave her rendition of "Black or White," taken from Jackson's Dangerous album.


THE GROOVE. Sporting a single white glove and a black hat, Gary Valenciano grooved to the beat of "Man in the Mirror," "Smooth Criminal," and "Billie Jean." Mr. Pure Energy brought the house down as he moonwalked and showed off fancy footwork for the benefit of the viewers.

ASAP's UD4 (Ultimate Dance Four) females, Shaina Magdayao and Maja Salvador, then shaked their booties to the tune of "Rock With You." This song helped Jackson score one of the first Billboard number-one singles in the 1980s, as well as one of the last big hits of the disco era.


Gab Valenciano and Rayver Cruz dominated the stage as they heated up the stage with "Dangerous," culled from Jackson's album with the same title.

Mickey Perz and John Prats had a dance showdown as they performed the 1987 hit, "Bad." This song was the second of five Billboard Hot 100 number-one hit singles from the album Bad, and was MJ's seventh number-one single overall.

Wearing an all-white ensemble, Vhong Navarro pulled off Jackson's "Smooth Criminal" with his own smooth moves, including the famous anti-gravity lean that had the crowd cheering and clapping for more.

Billy Crawford and Sarah Geronimo were pumped up with energy as they snapped their fingers and twirled around to the tune of "Beat It." One of the most lauded songs in history, "Beat It" was certified platinum in 1989.


They then segued to Michael Jackson's 1984 hit single, "Thriller." The song remains popular as proven by sales of over 1,159,000 digital downloads in the U.S. aloneand regularly returns to the Billboard Hot Digital Songs chart, since the chart's inception in 2005.

THE HEART. Michael Jackson wasn't just known for his rock and roll songs, he also popularized a lot of inspirational songs.


During the latter part of the July 5 episode, Zsa Zsa Padilla and Sarah Geronimo sang "Will You Be There," a song released by MJ in 1993. The single was taken from the 1991 album Dangerous and also appeared on the soundtrack of Free Willy (1993). Further enhancing the rendition of Zsa Zsa and Sarah was the singing group The CompanY.

Right after that, Charice Pempengco and Lea Salonga led them in singing "Heal the World," also from the hit album Dangerous. In a 2001 Internet chat with fans, Jackson admitted that "Heal the World" is the song he is most proud of.

Gary Valenciano returned onstage to sing "Man in the Mirror," the song earned for Jackson a nomination for Record of the Year at the Grammy Awards.

For the finale, Zsa Zsa, Charice, and Lea Salonga joined Mr. Pure Energy in asking everyone to "make that change."


For all his contributions to the world of music and in pop culture, Michael Jackson is indeed an icon worthy of being remembered in this grand fashion.
Read Next
Read More Stories About
Michael Jackson, ASAP, TV, television
Post a Comment
Latest Stories