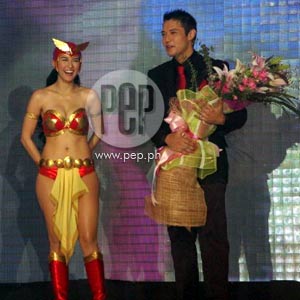 Marian Rivera and Mark Anthony Fernandez had their first shooting day last week at Bulacan. In the photo above, the stars of Narda were photographed together during the trade launch of GMA-7 held recently in Makati City.

According to GMA-7 insiders, the new version of Mars Ravelo's Darna will air its pilot episode on August 10, 2009. Dubbed as Narda, this 2009 version of the beloved komiks will be topbilled by Marian Rivera and Mark Anthony Fernandez. Valentina, the infamous villain in the story, will be portrayed by Iwa Moto. This new GMA-7 series will be directed by Dominic Zapata and Don Michael Perez.


PEP (Philippine Entertainment Portal) previously published a report naming the other cast members of this upcoming fantaserye: these are Nadine Samonte, Isabel Oli, and Ehra Madrigal as the women who will fight Darna; Rita Avila and Jestoni Alarcon as the parents of Narda (the alter-ego of Darna) and Buboy Villar as Ding, the sidekick of Darna.


Janice de Belen is tapped to be the mother of Valentina while Paolo Contis is the father of Valentina, making him the king of the snakes. Celia Rodriguez will have a special role as the woman in charge of the orphanage where Narda grew up.

Last Friday, July 10, Showbiz Central paid a visit to the set location of Narda in Bulacan. Lead stars Marian Rivera and Mark Anthony Fernandez shared their excitement over their first TV project together. For Marian, the long rest she was given before this big project made her excited all the more.

Mark Anthony also revealed that, just like Marian, he didn't sleep much before their first taping day. For him, it was excitement mixed with a little bit of nervousness.

"Everybody has their spirits up dito," said Mark. "Okay din ang location ng set namin ngayon." Although Mark and Marian have seen each other around GMA-7, this is the first time that the two would actually work with each other. What were their first impressions about each other when they first met on the set?

ON BECOMING DARNA. That day, Marian had already shot her first few scenes that took place in an orphanage.

Her character Darna is known for swallowing a magical stone that will transform her into a superhero. Has Marian actually seen this prop?


Click HERE to view more photos of Darna during the trade launch of GMA-7.