Ride with Cesar Apolinario in I-Witness 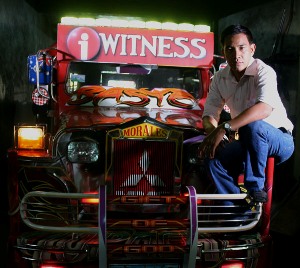 More than six decades have passed since the jeepney, a World War II leftover vehicle, was modified into a public transport. The jeppney's robust built and dependability propelled it to the status of being the Philippine's national transport, a symbol of our culture and ingenuity.

But due to lack of technological innovation, jeepneys are now deemed highly inferior to the trains of the railway transport system. The LTFRB even announced recently that the number of jeepneys in Metro Manila will be lessened significantly. Is this the start of the jeepney's eventual demise?

In his first documentary for I-Witness, GMA Senior Reporter and Banal director Cesar Apolinario joins three charming jeepney drivers as they traverse through the busy roads of Luzon and tell amusing stories about life in the fast lane. Direk Cesar won the Best Director trophy during the 33rd Metro Manila Film Festival.

Kano is the perfect jeepney driver who exemplifies the famous phrase "basta driver sweet lover." He has 7 children from four different women, all of whom were his passengers before. Kano's route stretches from Montalban, Rizal to Cubao Quezon City. To augment his income, Kano illegally cuts his trip short to steer clear from heavy traffic in Aurora Boulevard, a main road in Quezon City also serviced by other competitors like FX taxis and the extensive LRT 2 line.

Lolo Pilo has been driving his jeepney for more than half of his life. For 38 years, he says he has never regretted choosing jeepney driving as a livelihood. Lolo Pilo even declares that his love for his ex-wife compares poorly to the devotion that he gives to his 14-year old jeepney, where he also prefers to stay and sleep alone.

Four hours away from the City of Pines, a remote community bereft of technological wonders relies only on the jeepney to survive and support the whole populace's needs. Residents of Gadang in Benguet usually ask Bert, one of the drivers of the only four jeepneys that travel back and forth the town, to buy them their household goods and supplies.

From the chaotic streets of Metro Manila to the mountain edges of Benguet, Cesar Apolinario takes on the driver's seat this Monday midnight in this amazing road documentary "Tatlong Pasada," airing on I-Witness after the late night newscast Saksi on GMA-7.