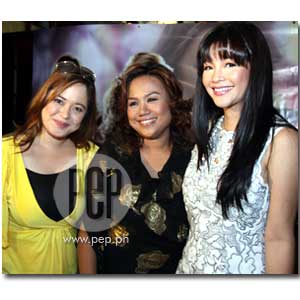 
Long before Regine Velasquez earned the title as Asia's Songbird, she was a struggling and aspiring singer tirelessly competing in various amateur singing competitions around the country.

Looking at Regine's outstanding credentials, it is of course easy to drop the word "unparalleled" in describing the Songbird's achievement as an artist. But unbeknownst to many, Regine's talent during her difficult startup days was oftentimes eclipsed by an equally ambitious talented singer named Minerva "Eva" Castillo.

Those familiar with Regine and Eva's story can attest to how the two competed intensely in the amateur singing circuit.

REGINE-EVA REUNION. But while talent and ambition served as a common factor between the archrivals, Eva's rocky personal life unfortunately outweighed what supposed to be a promising career. And while Regine soldiered on to fulfill her dream, Eva lost grip and tumbled into obscurity, leaving her with her memories, 300-plus trophies and the admiration of critics and supporters.

It was a few months ago when GMA-7 featured Regine in its special offering titled Roots to Riches. The show traced Regine's long and hard fought way to stardom, which automatically included her long forgotten rival. It was a touching reunion, with the contrast in Regine and Eva's fate revealed to audiences.

The meeting eventually rekindled the friendship between the two old singing rivals. Fortunately, Eva's reemergence in television paved the way for a second chance as TV guestings and singing engagements started knocking on her door following Roots to Riches.

"Marami na kong bio-pics na ginawa para sa GMA so when we sat down with Eva, our team thought that this is just one of those interviews," director Jun Lana told the entertainment press last week.

"But when she told us her story we realized that this is a special story to see the contrasting struggles of these singers na nagsimula noon. Nakita natin silang magtagumpay, kumanta at napakaraming pinagdaanan. At nung interview pa lang pinaiyak na kami ni Eva. You know when we write stories like this, kaming mga writers, we learn a lot from people. It's really an honor listening and writing their stories because ang dami naming natututunan. And I really feel that this is one special presentation of SRO that you shouldn't miss."

And with that, SRO Cinemaserye reveals that story behind Eva's struggle: a life plagued by poverty and series of ill-fortune. Behind Eva's unique talent and early success was a troubled soul trying hard to rise above the constant ridicule of non-believers.


Minerva "Eva" Castillo became a singer at the tender age of 9. She endured a childhood of emotional and financial poverty. Eva was bullied, ridiculed and taunted because of her looks. After marrying at the age of 17, she pursued a better-paying job to make ends meet for her family. Throughout these trying times, her career fell and Eva retired from performing.

It was an inspiring tale of ambition, shattered promise and eventual redemption. As Regine Velasquez pointed out during the press conference, "It was never too late for a second chance."

Portraying Eva is TV host-actress Manilyn Reynes and she will be joined by Glaiza de Castro and Renz Juan. Regine Velasquez shows her support by appearing in the series in a special role.