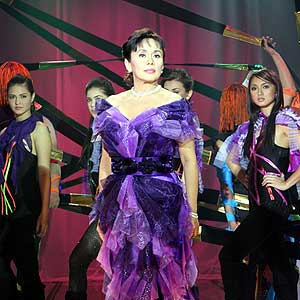 When asked if the ABS-CBN TV special will also narrate her colorful love life, Vilma Santos quipped: "Hindi nila nilagay, sayang!" Vilma: A Woman for All Seasons will air every Saturday night this August. Ate Vi (center) will perform her famous dance routine with young stars Princess Ryan and Iya Villania, among others.

In the trailer of the upcoming show Vilma: A Woman for All Seasons, Megan Young is being instructed to slap Vilma Santos as part of their workshop.

Given the stature of Ate Vi in the entertainment industry, it is easy to understand why Megan would hesitate to raise her hand against the veteran actress.

Ate Vi has captured the attention of the public ever since she starred as Trudis Liit in the 1963 film of the same name. Since then, she has starred in 230 films (including those where she had cameo roles) and bagged numerous acting awards from various award giving bodies in the Philippines.

Her career became even more colorful when she became the mayor and eventually, the Governor of Batangas. Still, she has not forgotten her showbiz roots and with the permission of her constituents, she has taped scenes for her upcoming film titled In My Life. This Star Cinema film will mark Ate Vi's return to the big screen since she was last seen in the 2004 movie Mano Po 4: My Love.

Vilma: A Woman for All Seasons was originally conceptualized as a two-hour program but management decided to expand it to five parts to give viewers an intimate look into the life and times of Ate Vi.

The five-part TV special will be aired on all Saturdays of August. Presented in a documentary-magazine and reality TV format, the various part of Vilma will be hosted by different hosts namely Claudine Barretto, Angel Locsin, Vhong Navarro, Luis Manzano and John Lloyd Cruz.

The first episode (August 1) is hosted by Claudine Barretto who has worked with Vilma in the drama film Anak. This will highlight a special acting workshop by Vilma herself in collaboration with respected director Laurice Guillen for hand-picked Star Magic talents who will imitate scenes from her unforgettable movies.

This exclusive workshop, also called a master class, was conducted by Ate Vi with the help of Direk Laurice Guillen. Viewers will be able to see Kim Chiu act out a crucial scene in The Dolzura Cortez Story (1993). Pinoy Dream Academy scholar Bugoy Drilon portrays the doctor who will tell Kim's character that she has AIDS. The singer-actor will then bear the brunt of Kim's anger as she slaps him hard.


Another exciting scene to look forward to is the one culled from Broken Marriage (1983). Coco Martin and Nikki Gil reprise the roles of Christopher de Leon and Vilma Santos for a brief re-enactment of this family drama.

On August 8, viewers will see Vilma as a TV host, dancer and performer. With funny man Vhong Navarro adding laughter with his comical antics and wacky remarks as the host, the Star for all Seasons shares some of her insights and experiences during tapings and shootings: from unavoidable health concerns and even to romantic problems with her good-looking leading men. Viewers will relive the days of her defunct musical-variety show, Vilma, where she used to do her special numbers in colorful costumes and danced complicated dance routines choreographed by Maribeth Bichara.

Joining the prized actress in the dance workshop are young stars Shaina Magdayao, Angelica Panganiban, Iya Villania, Empress Shuck, Nina Dolino, Princess Ryan and Dianne Medina. Definitely something to look forward to is the much-awaited dance number of Vilma with the said stars!

Next episode (August 15), fans and supporters will have an exclusive preview of Vilma's private world as one of the young actresses closest to her heart, Angel Locsin, hosts this very personal chapter. Vilma welcomes viewers into her home in Alabang which is the very first time her private quarters will be shown on Philippine television. Featuring the prized actress as a wife, mother, sister and friend, viewers will see how she spends her free time at home and what a "normal" family day is in the life of Governor Vi.

On the fourth Saturday (August 22), Vilma is shown as an empowered Filipina leader being the hands-on and the first woman Governor of Batangas and a U.P. Gawad Plaridel Awardee for her achievements as an actress and a public servant.

Capping off this five-week special (August 29) is the making of Vilma's upcoming movie, In My Life. Her eldest son Luis and John Lloyd who serve as the hosts of the final installment. Be the first to view movie scenes and events shot at the colorful city of New York, listen to selected interviews with the cast and crew as well as trivia about the much-anticipated film and get an exclusive sneak peek into the never before seen behind-the-scenes shots.

Mark your calendars and block off your Saturday evenings for the whole month of August! Have a date with the one and only Star for all seasons and catch Vilma: A Woman for all Seasons TV special on all Saturdays of August, after Maalaala Mo Kaya on ABS-CBN.