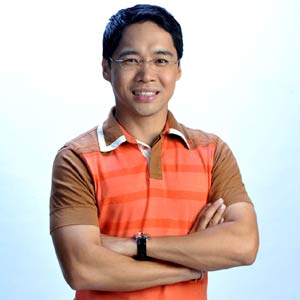 Anthony Taberna, co-anchor of DZMM's Dos Por Dos and ABS-CBN's Umagang Kay Ganda and Kalye, says that he is already used to receiving threats on his life. He will assess the gross domestic product of the country in the July 27 episode of Kalye.

With or without threats, expect ABS-CBN anchor Anthony Taberna to continue with his exclusive exposes, accurate reporting, and analyses on national issues in his radio and TV programs.

The co-anchor of DZMM's Dos Por Dos and ABS-CBN's Umagang Kay Ganda and Kalye said he is already used to receiving threats on his life. He, however, maintained that these won't stop him from being a hard-hitting commentator and a persistent reporter.

"At the end of the day, it's my children's future that is at stake. I can't just be silent when I can see people engaging in corruption and disrupting peace and order," he said.

That is why on his radio and TV programs, Anthony makes it a point to tackle and give his take on critical issues concerning the nation.

This Monday (July 27) on Kalye: Mga Kuwento ng Lansangan,Anthony will unveil the real state of Filipino families amid what the government claims as the highest ever economic growth in the country's history as measured by the gross domestic product.

Aside from his interaction with people and his immersion in their lives, people are also sure to watch out for his commentary on the administration's efforts against poverty.

"In Kalye, we don't only write or experience the stories ourselves, we also get to share our views about them," Anthony said.

Meanwhile, Sol Aragones and Atom Araullo will also be reporting on other aspects of the state of the nation. Sol will check on the condition of President Gloria Macapagal-Arroyo's infrastructure projects while Atom will interview Melissa Roxas, the Fil-Am activist reportedly abducted and tortured by the military.

Join Anthony Taberna, Sol Aragones, and Atom Araullo as they expose the real state of the nation this Monday, (July 27) on Kalye right after Bandila on ABS-CBN.