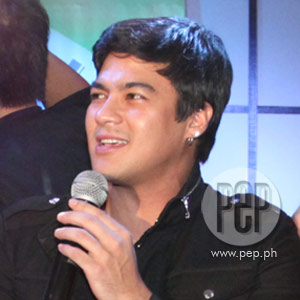 Nakita ng marami ang interview mo sa Cool Center regarding Martin Nievera. He made a comment about you at nagalit ka. How are now now? Are you in the point na nakausap mo na si Martin and are you interested in patching things up with him?


"Kapag nalagpasan mo yun, that's when you realized you've moved on and you've learned a lot and you tried to be the best person you can be. At yung sa akin, it's been said and done. Kung anuman yung pinagdaanan namin in the past, it's the past, tapos na siya."


Kung makita mo si Martin tomorrow, what would be the situation?


Before you and Pops broke-up, was there a time when you considered marrying her?


If you'll look back, sa relationship n'yo ni Pops, would you consider yourself a very good boyfriend?


"If I will look back, siyempre, nagkaka-edad na rin tayo. But I can honestly say, with Pops, I was at my best."


You we're married before, of course, with Aiko Melendez and it didn't end well. Now that you're single, do you see yourself having the ability marrying again? If yes, what are the things that you have to change para lang maging successful ang next marriage mo?


"Ako, yung marriage, ang hirap tingnan, e. Lalo na kapag single ka," natatawang sabi niya. "Siyempre, marami kang...I'm not so sure, if it's about changing yourself but finding the right match or the right partner for you.


Are you dating right now?

What are your next plans after bringing David Cook and David Archuleta to Manila?


In fact, Jomari is now part of the team that will be bringing in Marie Digby, the newest YouTube sensation.