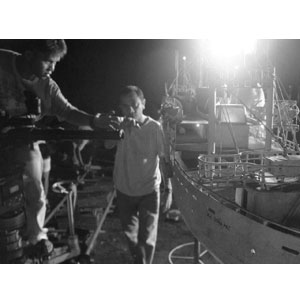 Director Yam Laranas (in white t-shirt) directs a cameraman as he shoots a replica of MV Doña Paz for Asia's Titanic, the first Filipino-produced documentary for the National Geographic cable channel.

On December 20, 1987, Aludia Bacsal, 14, and her father boarded an already crowded ship in Tacloban City, Leyte. Excited Aludia even skipped her school's Christmas party just to spend the holidays in Manila. Little did she know that the ship—the now infamous MV Doña Paz of Sulpicio Lines—was fated to sink after colliding with an oil tanker six hours later, killing an estimated 4,000 people on board.

Follow the stories of Aludia and Salvador Bacsal, and 22 other survivors, in Asia's Titanic, the first all-Pinoy documentary produced for the National Geographic Channel (NGC). The one-hour exclusive will be aired on Tuesday, August 25, 9 PM.

The documentary features interviews with survivors, stock footage, and reenactments of the incident.

According to Direk Yam, the purpose of the documentary is to tell a good story, not to investigate the cause of the tragic accident.

"This is not an investigative piece. It's not even reportage, not current events. It's story-telling, more of a clear narrative of what happened to Doña Paz," he explained.

Direk Yam, one of the few Filipino directors to have directed a full-length feature in Hollywood, did Asia's Titanic through a grant from NGC, a cable network known for producing high-quality shows about science, nature, culture and history. To produce a documentary for NGC, the filmmaker must pass a rigorous screening process administered by its top executives.

The Filipino director was one of the 15 Asian producers who were given the grant in 2004. More than 300 filmmakers from Asia competed for the slot, and it was the first time for an all-Filipino team to receive the grant.

Asia's Titanic will premiere on the National Geographic Channel (Sky Cable Channel 41) on August 25, 9 p.m. The other screening hours are: