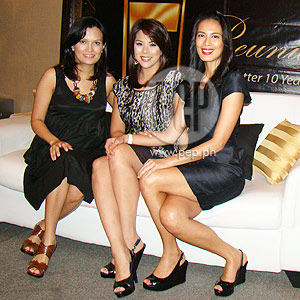 "It's gonna be exactly like six years ago, but us looking, you know, better," said Cher Calvin (middle) about the special reunion of the defunct lifestyle magazine show called F. She returned to the Philippines to work again with her former co-hosts, Angel Aquino (right) and Daphne Oseña-Paez (left), after ten years.

The F girls are back for a special reunion TV episode!

Before conducting an exclusive interview with the former hosts of the lifestyle magazine show F last August 27, PEP (Philippine Entertainment Portal) spotted Cher Calvin and Angel Aquino browsing through an album containing photos when they were still part of the ABS-CBN show.

"It is a dream come true because those are my favorite years of my life," said Cher about being reunited with former co-hosts, Angel and Daphne Oseña-Paez. Cher left the program to be a newscaster in KTLA in Los Angeles, where she gained an Emmy award for Best Newscast in 2006.

It was July of this year when Angel and Daphne were launched as the Ambassadress for Olay's newest campaign called Olay Exposé. They announced that Cher would be coming back to the Philippines for a special reunion of the F girls.

The special reunion episode of F will be shown on September 27 during ABS-CBN's Sunday's Best timeslot.

The F girls never thought that a reunion would ever happen after 10 years.

Being the first person tapped by Olay for this project, Daphne said she was initially hesitant to ask Cher. She narrated, "I was really kinda nervous asking her [Cher] about it. When you were all excited, I was like, ‘Yeah! It's gonna happen!' And finally, we're here!"

Angel was equally excited to reunite with her former co-host. "I was just very excited to see us three again," said the TV host-actress. "I just couldn't wait. I wanted to know when Cher was coming in and I wanted to see her the first day that she was here. I just really waited for this day to come. No anxiety or whatsoever, I was really excited to see you guys. Just to see us here together and seated on a couch, just like the old days!"

Cher then recalled the things she missed about being an F host. "We travel a lot, we have a lot of fun. You know, I didn't realize what an impact this show made! And to honestly be called back six years later, I can't believe that people would even remember my name."

She added, "I missed this. I mean, we're giggling, we're happy, it is a sisterhood. You know it's amazing it's amazing because we haven't seen each other in six years. We haven't been in touch since we decided six months ago. But it doesn't matter because this is family, F is for family."

BEING AN F GIRL. During the interview, the three girls also related to the media the things that they learned from being an F host.

For Daphne, F has broke the notion that women always compete with each other. She said, "I think that was the beauty of F I think, you know, we should keep the women together. There's always a notion that women compete. And there must be some cattiness behind us, you know, backstage. But with us, we always had our own thing beyond F, and so F was always so much fun for us."

The Pinay newscaster in L.A. said, on the other hand, that she missed the lighter side of being the face of a television show.

Cher stated, "You know, I was missing the days when we would just be bantering. Now, it's about reading death and destruction. Now, it's all different, all-accurate, you know. But it's nice to be back and talk about some life and look at the bag that Daphne has. And it's funny because I'm so much in that zone now of [delivering] hard news. Fashion is so secondary, unfortunately. You know, it's like, ‘Oh God! I can't wait to be back with F girls and see what's new.'"

For Angel, F helped her a lot in hosting her current program that is similar to F, the Studio 23 show Us Girls.

She remembered, "Before, I looked up to Daphne. I mean, I was new. Even though I came from fashion, like I was a model, but I didn't know about style and fashion, anything about that. That side of the world was a stranger to me. But when I got to be with Daphne and Cher, such stylish women, a little bit of those rubbed off to me. That was good. Now, I'm able to be the Daphne in the group for Iya and Megan. F helped me with my live hosting career and all the other things I'm doing now."