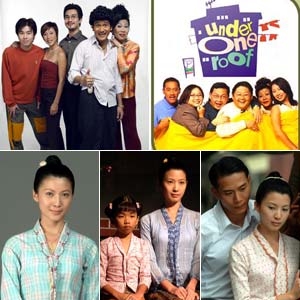 TV5 proudly presents its Noontime Drama Delight and Laughternoon Break lineup of Singapore made series that airs every weekday. These are (top row) Phu Chu Kang (1:00 p.m.), Under One Roof (1:30 p.m.), and (bottom row) the cultural masterpiece, The Little Nyonya (12:00 noon).

TV5 Senior Vice President and Head of Brand Management Jasper Evangelista denied rumors that the network was about to launch a noontime program to compete against the two bitter rivals in the block. The TV executive announced this during a press conference held last July 30 at Cravings restaurant, Shangri-La Plaza Mall in Mandaluyong City.

"Because clearly Wowowee and Eat Bulaga! they have the lion share [of the viewers] already or practically the whole Philippines are watching them already so wala namang pangangailangan doon. Ang TV5 naman kung saan may pangangailangan dun kami bumabawi," pointed out Mr. Evangelista.

The network executive once again stressed the network's vision of offering alternative programs to cater to Filipino viewers.

FILLING THE VOID. Making good on TV5's promise, the Novaliches-based station proudly announces the launch of its Noontime Drama Delight and Laughternoon Break to bolster its afternoon programming.

Leading the list is the Singaporean drama series The Little Nyonya. Described as a cultural masterpiece touching on the life and times of the half-Chinese community, the series dates back to Malacca (the third smallest Malaysian state after Perlis and Penang and is located in the southern region of the Malay Peninsula) in the '50s—when Peranakan (term used for the descendants of late 15th and 16th century Chinese immigrants to the Nusantara region during the colonial era) culture was at its peak. It begins with a girl named Angela, who discovers the history of her ancestors, their struggles and plight as Nyonya women appeasing both the Chinese and Malay communities.

The Little Nyonya had won Best Drama Serial, Best Supporting Actresses, and Best Actress in the 2009 Star Awards in Singapore.

Shifting to quality light comedy, TV5 presents the Singapore award-winning comedy series Phua Chu Kang. The show focuses on the hilarious hits and misses of Kang's domestic life based on his everyday interactions with his family.

Still leaning on the funny side is the Asian TV Awards Best Comedy Series Under One Roof. The said comedy series, considered as one of the premiere comedy sitcom in Singapore dwells on the wacky of a typical multi-ethnic Sinagporean family.

Station brand manager Aristoncito Cebrero explained that the decision to preview Singapore series here in local shores was a conscious effort by management to veer away still from the common menu (read: Korean series) dished out by the two giant networks.

"One great thing about Sinagpore series in terms of plot and themes is that it is very close to us Filipinos," said Cebrero, who cited the fact that Singapore, like the Philippines, is bursting with multi-racial dynamics. The tradition of both countries also has a lot of surprising similarities.

It is also interesting to point out that the TV5 noontime and afternoon lineup have previously enjoyed great success in other Asian countries like Malaysia, Cambodia, Vietnam, China, Australia, Taiwan, China, Australia, Taiwan, Hong Kong, France and even Canada—a telling proof that the mentioned programs are good and were already audience tested even before penetrating the local airwaves.