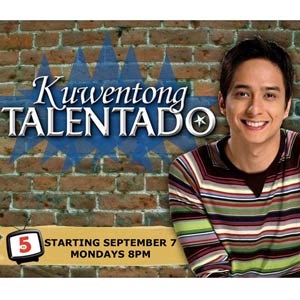 On TV5's Talentadong Pinoy, all sorts of talents are seen in the limelight, but little is heard of the stories behind the hopefuls who flock to the auditions, make it to the cut, and eventually for some, to the Hall of Fame. With the show's success of being the leading Saturday program, Talentadong Pinoy has spawned a spin-off that aims to reveal stories worth-telling to inspire every talented Filipino, titled Kuwentong Talentado, airing its pilot episode this Monday, September 7.


Featuring never-before-seen footage of hundreds of aspiring contestants during the auditions, heartwarming stories of how, against all odds, ordinary people become professional performers, most memorable and most talked-about moments during tapings, as well as tips from the Talent Scouts and the Hall of Famers, Kuwentong Talentado is your backstage pass to see and hear the stories and secrets behind one of the Philippines' leading talent shows.


"It's both a support program for, and an independent show from, the original," says Talentadong Pinoy host Ryan Agoncillo. The show serves as a prelude—a backstory, on the lives of the contestants of the following Talentadong Pinoy episode that airs Saturdays, as well as success stories of previous winners, runners-up, and Hall of Famers.


Not limiting the stories to the performers who compete on the show, Kuwentong Talentado also features ordinary Pinoys who have exceptional talents, such as carpenters, mechanics and the like, who also have their own share of interesting and inspiring stories.


On Kuwentong Talentado, behind every success story is a talented person who grabbed an opportunity, and behind every talent is a source of inspiration to turn dreams into reality.


Witness and be inspired with how great the Filipino talent is and how Pinoys' perseverance and hardwork result in success in the very inspiring Kuwentong Talentado, airing every Monday starting September 7, 8:00 PM on TV5.