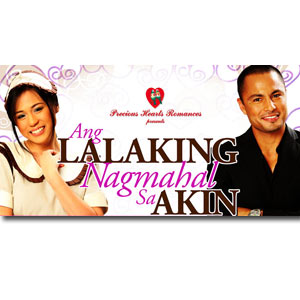 Despite being fairly new, it looks like the fresh tandem of Toni Gonzaga and Derek Ramsay can hold a candle to the hottest love teams of today.

The new afternoon soap, adapted from a Pinoy pocket book of the same name, follows the story of Flor, a bubbly and optimistic lass from the province who travels to Manila to work in a hotel. She then meets playboy Zephy (Derek), the owner of the hotel, who falls in love with her after a few unfortunate events.

Derek, for his part, was chosen for the role because of his charm.

Toni's gay bestfriend, meanwhile, is played by Janus del Prado. Deramas said the young actor was chosen for the role because they believe he can pull off playing a gay character.

SYNOPSIS. Precious Hearts Romances Presents Ang Lalaking Nagmamahal sa Akin follows the story of a good-hearted and optimistic probinsiyana named Flor (Toni Gonzaga), who goes to the city to find a decent job, so she can support her mother and two brothers. She ends up working as a chambermaid in a first-class hotel, where she meets the gorgeous and womanizing hotel owner Zephy (Derek Ramsay), who will fall in love with her.

Zephy willingly turns his back on his wealth just to be with his beloved, but Flor's family is up in arms against their relationship and subject Flor to many trials. Flor is forced to make the toughest choice in her life—will she leave her family for the love of her life?