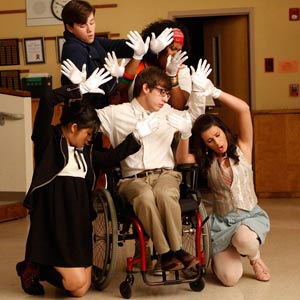 Mixing comedy, drama, and popular music, Glee will be aired every Monday night at 8 pm on Jack TV and Tuesday night at 10 pm on ETC. Catch its pilot episode tonight, September 14.

There are three good reasons to root for the underdogs: They are always determined, often dysfunctional, and most likely hilarious without them knowing it.

The underdog in all of us can touch base with Glee, a new musical comedy that will premiere on Jack TV tonight, September 14, at 8 pm and on ETC on September 15, Tuesday, at 10 pm.

Nip/Tuck and Popular creator Ryan Murphy brings us to McKinley High School, where teachers have low standards and kids are, ahem, dumb. In the middle of mediocrity and apathy, Will Schuster (Matthew Morrison), idealistic teacher, revives his own passion for singing and performing by saving the school's Glee Club from obscurity. Armed with limited resources and a stubborn determination, he gathers an eccentric bunch of students and helps them realize their star potential even if everybody thinks they are just a "tone-deaf acne factory."

Realizing that the club cannot take off with kids who (in the words of Sue, the cheerleading coach, occupy the sub-basement of the high school caste system) Schuster takes steps to remedy this situation. He blackmails Finn Hudson (Cory Monteith), the quarterback of the school's football team, into joining the club. They are eventually joined by Quinn (Diana Argon), Finn's cheerleader girlfriend, and her posse in a jealous fit over Rachel. Together, the "gleeks" revive the club and try to make it into the regional competition by recruiting more members.

On Glee, viewers will see maladjusted teachers hit on each other, hit on students, double as drug dealers, and power trip in the faculty lounge. That is the charm of Glee—it's odd visuals and crude jokes. If Glee is a movie dog, it's a bad-smelling, flea-infested Lassie.

The hour-long show has a biting humor that hits you like a stun gun. Take it from Rachel explaining the reason for her behavior: "Fame is the most important thing in our culture now." Or Kurt, composing himself before he is loaded in the garbage bin by the jocks, "Someday you will all work for me."

Glee also has a great lineup of songs that appeal even to a broad audience. Watch out for a fantastic choral rendition of Journey's "Don't Stop Believing," and a raunchy performance of Salt ‘n Peppa's "Push It"—big crowd pleaser. Also not to be missed is Cory's singing of Reo Speed Wagon's power ballad "Can't Fight This Feeling" in the gym shower , and Lea's version of Rihanna's "Take a Bow" which is sad and sweet and will make you want to rewind the scenes. The Gleeks also perform Kanye West's "Gold Digger."

Rounding up the cast are Jane Lynch as the hyper feminist gym teacher Sue Sylvester; Jayma Mays as the cleanliness obsessed Emma Pillsbury; Gesalyn as Will Schuster's crafts addicted wife; and Mark Salling as Noah "Puck" Puckerman, Finn's friend on the football team and a true-blue jock.

Yes, Glee is cliché. It's a classic story of high school wannabes rising to the top. But it works, thanks to its energy, and its eccentricities. The first episode makes who want to belt out in the shower. The second makes you want to see the next one already. I have the feeling this is going to be great.