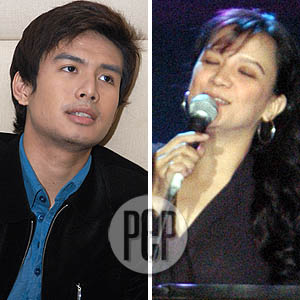 Christian Bautista acts as Jesus while Cooky Chua is cast as Mary in the Jescom production Kunin Mo O Diyos. It will air on April 5 (Maundy Thursday) from 7 to 8 p.m.

Instead of completely going off the air on Maundy Thursday, Good Friday and Black Saturday, ABC-5 observes the most solemn days of Holy Week with unique programs that will help viewers keep the week sacred. ABC-5 has packaged a three-day spiritual journey that promises to be inspiring and enlightening.

ABC-5 has partnered with the Jesuit Communications Foundation, Inc. (Jescom) for this special Lenten offering.

Spiritual Journey is a different kind of reality show. It follows eight young adults, four males and four females—all of them with diverse interests and backgrounds—who get cloistered from the outside world for a three-day retreat at the Sacred Heart Novitiate in Novaliches, Quezon City, across the La Mesa Dam. The novitiate is a 74-year-old Jesuit facility secluded by ancient trees on rolling hills spread over a hundred hectares.

The eight youths live, pray, reflect, share, cry, laugh, and discover their new selves together as they take the journey one day at a time. They go on a Station of the Cross at the San Francisco del Monte grotto, they hold their graduation and are joined by their families in the shade of a hundred year old tree. They swear to continue the friendship forged at the Novitiate. The six-hour reality show will air two hours a day at 1 p.m. to 3 p.m. on Maundy Thursday (April 5), Good Friday (April 6), and Black Saturday (April 7).

Three short films/docu dramas produced by Jescom are also scheduled over the three days starting with Kunin Mo O Diyos (7 to 8 p.m. on April 5). The musical drama features an all star cast: Joel Torre as narrator; Christian Bautista as Jesus; Cooky Chua as Mary; Noel Cabangon as Judas, and Cathy Azanza as Mary Magdalene. Dramatized segments combine narratives and musical interludes depicting how Christians should face the burdens in their lives with Jesus by their side. Watch the cast members give powerful musical performances.

In Huwag Mangamba (7 to 8 p.m. on Black Saturday, April 7), an urban poor activist, and a cancer survivor and wife of a member of the Apo Hiking Society share their compelling story of how they overcame trials and suffering when they offered their tribulations to God. Bishop Chito Tagle of Imus, Cavite and Jesuit Brother Nono Alfonso of the Loyola House of Studies are commentators. Testimonials are accompanied by musical interpretations of songs composed by Manoling Francisco, SJ and Arnel Aquino, SJ.

Viewers can also participate from their homes in the traditional Holy Week religious services, all of which will be broadcast live from the Church of Gesu at the Ateneo de Manila University, Loyola Heights, Quezon City. Catch The Lord's Supper Mass, 4 to 6 p.m, on Maundy Thursday; Veneration of the Cross, 3 to 4 p.m., on Good Friday; and Easter Vigil, 8 to 10 p.m. on Black Saturday.

The Lenten package also includes back-to-back documentaries on April 5, 3 to 4 p.m., on the life and apostolic preachings of St. Josemaria Escriva, founder of Opus Dei, a mobilization of Christians leading holy lives who sacrifice willingly for others. The docus cover glimpses of what are called "intense catecheses" Escriva's preaching tour in early 1974 in Brazil, Spain, Argentina and Peru. Escriva died in 1975 and was canonized in 2002 in Rome. Eighty thousand signed accounts of spiritual and material favors are attributed to him.

The schedule also includes The Passion from Familyland Apostolate for Family Consecration on Good Friday (4 to 5 p.m.) and the four-hour movie Jesus that traces the life, passion and resurrection of Christ scheduled on Black Saturday from 3 to 7 p.m.