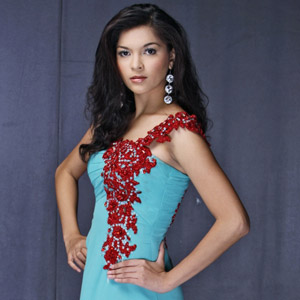 Janina San Miguel is the first contender to be eliminated from Celebrity Duets 3.

The singing celebrities once again croon, groove, and perform their way into the hearts of Filipino viewers through the third season of Celebrity Duets. The first elimination night took place last Saturday, September 12, which culminated in former beauty titlist and YouTube sensation Janina San Miguel's exit from the musical stage.

This time, however, all nine contenders were put under pressure, as they not only had to impress judges Direk Freddy Santos, Maestro Danny Tan, and Sea Princess Tessa Prieto-Valdez, they also had to put their best performing foot forward to win the votes of Filipinos nationwide.

The show kicked off ala Pussycat Doll-style, with lady dancers adorned in brightly colored clothes grooving to a "Hush Hush" / "I Will Survive" dance medley. After the opening act, the time was ripe for the first batch of performances.

First to take the stage was veteran actress and director Gina Alajar, who was paired up with singing bombshell Evette Pabalan. She and Evette grooved to the novelty hit song "Spaghetti Pababa" popularized by her partner's female group, the Sexbomb Dancers.

Gina, who collected praises from the judges for the past weeks, seemed to still up the ante with her Lady Gaga-inspired look, and chose to channel the femme fatale aura, complete with an exclamatory "Aw!"

Next was actor and now concert producer Jomari Yllan and his duet partner Radha, who both went after the R&B-hiphop vibe with Black Eyed Peas' "I Got A Feeling." Radha profusely praised her partner Jomari and admitted that she didn't expect this kind of talent from the actor.

After the performance, Celebrity Duets Season 1 grand winner and present judge Tessa Prieto-Valdez called out, "What a duet! Oh my gosh, you rock, man! You so rock! I can see you in the finals!" She continued, "Ang galing mo. I think [in] this one, you blended so well. I can hear your voice, and you're opening your mouth already."

After Jomari's performance, cosmetic surgeon Mikaela Bilbao followed suit and took the stage with Viva Hot Babe Sheree. Singer Sheree seemed to think that their chosen song, Cher's "Believe," fit Mikaela to a tee, owing to the latter's sexy and strong personality. Both girls entered the stage in striking silver dresses, glitter and all.

After the commercial break, three more contenders showed off what they got.

Fashion photographer Niccolo Cosme was first, with the Korean megahit, "Nobody," as popularized by the Wonder Girls. He sang the novelty song with partner Jolina Magdangal, who openly shared her initial nervousness about the performance due to Niccolo's perfectionist nature.

They pulled it off quite nicely, and Danny Tan seemed to agree.

"You are one of the better singers in this competition," he told the singing photographer. "You're also one of the more comfortable [contenders] on-stage when performing. Constructive criticism lang," he countered, "Sa sobrang taas ng energy mo, sometimes you tend to shout, so control lang. But the performance is great," he said.

Up next was Aficionado businessman Joel Cruz, who along with singer Geneva Cruz, performed Tina Turner's "Private Dancer." True to Geneva's statement of wanting to ace the performance, both came up with two giant birdcages as props, which Geneva and Joel each entered separately during the performance.

Tessa found their display of talent "dramatic" and "wonderful' but said, "I couldn't see the sexiness! Parang kulang pa yung pagka-sexy mo!" she told the entrepreneur.

Last for this set was fashion designer Maxie Cinco. The designer performed his act with rap legend Andrew E., who recalled how mesmerized he was by Maxie's talent. He even noticed the designer's attempt to alter the lyrics of his very own "Humanap Ka Ng Pangit."

Maxie threw in some gay lingo for their performance and came up with the lines, "Kung betcha mong lumigaya ang iyong buhay, humanap ka nga chaka at ibigin mong tunay. Isang chaka talaga di mo kinekeri..." The innovative song continued with gay lingo all throughout and to complete their look, Andrew and Maxie wore bling-bling paraphernalia.

Garbed in a bonnet that seemed to channel the R&B vibe set by Duncan, Akihiro received a mix of praise and constructive criticism from Danny Tan.

Former beauty title holder Janina San Miguel sang a duet with Paolo Ballesteros's alter-ego Miss Bebot. Dressed in evening gowns, wigs and headdresses, they sang Gloria Gaynor's "I Am What I Am."

"Janina, you're exactly like me," said Tessa Prieto-Valdez of the beauty queen. "Except the height siyempre, pero you make daan na lang in the performance," she noticed. "Okay lang 'yan, you look so wonderful... Parang talagang nag-e-enjoy ka. In the end, that's the only thing that matters," said the Sea Princess about the former beauty queen.

Last for the night was world boxing champion Nonito Donaire, Jr with his duet partner, R&B Prince Jay-R. Prior to the performance, Jay-R gave the boxer a piece of advice with regard to his singing, "Don't get nervous [at] dapat confident lagi. That's what's gonna mess you up. Makakalimutan mo yung lyrics mo."

Nonito seemed to take Jay-R's advice to heart and put together a noteworthy performance, despite his recent bout with dengue fever. They sang Usher's "Nice and Slow," which they pulled off amid a backdrop of sports lockers and costumes made up of boxing robes, bruise make-up, and eyebrow plasters.

Now that all nine contenders have performed, the eliminations finally commenced.

Host Ogie Alcasid separated the celebrity contenders into three groups. In the end, Gina Alajar, Janina San Miguel, and Nonito Donaire, Jr. got the lowest number of votes and were pushed into the Bottom Three. These votes—the lowest of which was received by Janina San Miguel—were decided by home viewers based on the performances of the contenders the previous week. Janina San Miguel was a sport despite the verdict and exited the stage with a smile.

The pressure is still definitely on as the eight remaining celebrity contenders battle it out on-stage to remain on the safe side. Who will be the next contender to bid farewell? Find out next week on Celebrity Duets 3, airing every Saturday on GMA-7 right after Pinoy Records.