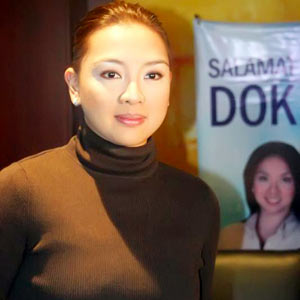 "It is through Salamat Dok! that we are able to educate the public towards wellness, healing and treatment. We found ABS-CBN to be a genuine and sincere partner as they are very service oriented. They have been truly been a partner with our doctors at Manila Doctors Hospital," said Atty. Nenuca Almira, one of the top management officials at the said hospital. Cheryl Cosim (in photo) hosts Salamat Dok, which airs ever

Salamat Dok! host Cheryl Cosim has a reason to smile again as her live weekend public service program partners up again with one of the leading medical institutions in the country.

"Health system is always in the top three of concerns in the any part of the world, and in the Philippines, it is the number one concern of Filipinos. And we have to thank both Salamat Dok! and Manila Doctors Hospital for that partnership that we have had in the last two years and extending forward. Salamat Dok! wouldn't exist without Cheryl Cosim and her vision for it," Maria Ressa said after the signing.

"We have been partnering with the program, Salamat Dok! since two years ago and now we are starting our third year. And during the last two years of our experience with Salamat Dok!, we really indeed found fulfilment in being able to serve our mission and vision of the hospital—that of being of service to the public through Salamat Dok!" pointed out Atty. Almira.

A thankful Cheryl meanwhile acknowledged the hospital for their continued trust in the show and is looking forward to many more years of partnership with the hospital.

CONTINUING PUBLIC SERVICE. Cheryl said that Manila Doctors was one of the first institutions that tied up with the public service show since the inception of the show six years ago.

"Napakalaking bagay ng partnership especially with Manila Doctors na kahit anong medical mission, they are there for us. Hindi lang po na andoon sila sa isang episode at magdadala ng isang expert as a guest but they also bring other doctors to give medical service para sa mga patients every Saturday and Sunday, for 200 to 300 patients every weekend. Like if our topic is about the heart, they bring in extra cardiologists yung other patients. We even refer other patients kahit hindi nila episode and they are more than willing to accommodate them," she said.

Cheryl said that they are sometimes frustrated that they cannot accommodate all the people who come to their medical mission because resources are very limited.

She also gets to see the plight of some of the patients who come to their medical mission.

"Kadalasan sa mga medical nakikita ko na malala na yung mga sakit nila. Like Maria Ressa said that one of the problems in our country is that our health system is so bad that we don't give enough medical attention to our people," Cheryl lamented.

The TV host said that sometimes she would resort to coaxing her friends to help out some of the patients that need some help.

LEANING TOWARDS PUBLIC SERVICE. Cheryl said that Salamat Dok! came to her as a blessing as a broadcaster five years ago.

"As the years went by, mas napunta ako sa public service. I like doing stories for Bantay Bata. And then I was so blessed and lucky they gave Salamat Dok! because I've realized that this is what I want more than doing the hard news.

"Like last year we went to Pampanga and Bulacan sa mga Badjao. They live under the bridge. And it's really smelly. Walang banyo. Tapos hindi sila sanay mag-Tagalog. Nag-medical mission kami and we also brought in groceries. And I was so happy. It also made me realize how lucky we are, or how lucky I am compared to the people. See, napapaluha na tuloy ako," she said while tears started to form in her as she recalled the experience.

SALAMAT DOK! THIS SEPTEMBER. For the month of September, Salamat Dok! goes to Biñan, Laguna this Saturday, September 19. The area is one of the dengue hotspots in the country. On Sunday, September 20, Dra Vicki Belo will guest on the show to talk about how to maintain beautiful eyes and the different treatment done like Mesotheraphy for Eyes, Botox for Crow's Feet and fine lines under the eyes and Blepharoplasty for eyebags and drooping eyelids.

On September 26, Salamat Dok! goes on a medical mission in Mandaluyong City together with DZMM. Finally, on September 27, Cheryl will discuss how breast cancer can afflict women and even men.

Catch Salamat Dok! every Saturday from 6 am to 7 am and every Sunday from 7:30 am to 8:30 am on ABS-CBN.
Read Next
Read More Stories About
Cheryl Cosim, ABS-CBN, TV, television
Post a Comment
Featured
Latest Stories
Trending in Summit Media Network