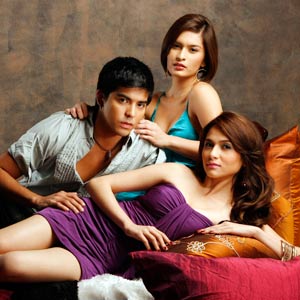 Ikaw Sana serves as a reunion for young actors Jennylyn Mercado, Mark Herras, and Pauleen Luna, and award-winning director Joel Lamangan. They all once worked together in Regal Film's multi-awarded entry to the 2006 Metro Manila Film Festival, the romantic drama titled Blue Moon.

After three years, Direk Joel has noticed that these young stars have improved a lot in terms of acting.

He also expressed his excitement to work on this primetime soap opera after directing the recently concluded Adik Sa 'Yo and Dramarama sa Hapon's Paano Ba Ang Mangarap, which was also topbilled by Jennylyn and Mark.

Eliza's life suddenly changed when she is forced to live with her father's (Tirso Cruz III as Gener) legitimate family because of the untimely death of her mother named Sonia (Mariz Ricketts).

At her new home, Eliza quickly gets along well with her half-sister Sofia. But their relationship turns sour when they realize that they do not only have the same father, but they also fell in love with the same man named Michael.

A few years back, Michael met and fell in love with Eliza while vacationing in the province, unaware of the fact that Eliza and his fiancée are actually sisters. However, their romance ended too soon after Michael's grandfather (Tony Mabesa as Don Ramon) tricked him into keeping his engagement with Sofia.

When they see each other again, Michael forces Eliza to run away with him, which prompts Gener to marry off her daughter to Michael. Sofia, out of anger, devised ways to sabotage Michael and Eliza's newfound bliss. Viewers will emphatize with Eliza as she suffers because of Sofia's wicked plans.

Ikaw Sana will premiere on September 21 before 24 Oras on GMA Telebabad. It replaces the teleserye All My Life.