Sunshine Dizon has a dysfunctional family in Tinik sa Dibdib 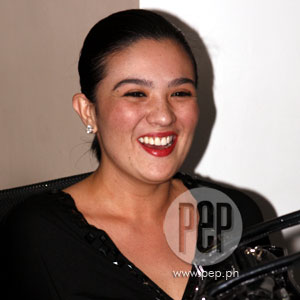 After reprising Nora Aunor's character in Bakekang, Sunshine Dizon is once again tapped to fill in the shoes of the Superstar in GMA-7's upcoming teleserye titled Tinik sa Dibdib. This Sine Novela offering is slated to air its pilot episode on September 28, 2009.

Sunshine visited the office of Summitmedia earlier today, September 17, to interact with the editors of the various publications and online affiliates (including Philippine Entertainment Portal).

PEP asked the Kapuso star how she felt about reprising the role of Ate Guy in this remake of the 1985 film.

"Well, as much as I can, I don't want to really pressure myself because nga si Ate Guy yun," said Sunshine. "Siguro, I'll be on the same level na lang when I played Bakekang before. It's not the matter of kailangan mong talunin whatsoever yung ginawa ni Nora Aunor because that's already Nora Aunor. Given na yun, wala ng makakatulad sa kanya, wala ng makakasurpass nung nagawa niya. So I really hope that I do justice din to the character that she played before. Sana man lang kahit konti."

How does she deal with the pressure that comes with the role?

"I really don't think so much about it. Kasi mawawala na yung fun, e."

She enumerated the names of her co-stars in her follow-up project after starring in the teleserye All About Eve.

How would she describe her character in Tinik sa Dibdib?

Who will be the so-called thorns in her life?

Who will serve as her love team partner in this teleserye?

"Well, there are two guys, one is Marvin Agustin, and the other one is Rico Barrera. Sila yung may mga gusto kay Lorna sa story. Ang first love niya is Rico but then she lets go of him because of family issues. And then, she falls for Marvin, then, that's where the hell starts na naman. She thought that getting married with Marvin, she'll have a better life pero mas worse pa pala yung pinasukan niya."

Adding to her miseries is Ara Mina, who is cast as the querida of Lorna's husband.

"Yeah, I did. Sobrang galing. Pero I watched it just for the sake of knowing the plot, pero hindi ko na siya inulit-ulit kasi I might you know...I want to have the freedom din to interpret the character. Baka kasi sabihin nila, ‘Naku, ginaya.' Ayoko, kasi nga hindi mo na pwedeng gayahin yun, e. Hindi mo na malalampasan yun. So, I think it's better that I have my own interpretation of the character. And you know, just hope na kahit papaano, I can live up their expectations."

"I'm not sure pa of the full cast but it's gonna be directed by Erik Matti. I'll be working with Mark Anthony Fernandez but I cannot reveal the identities of the other characters. It's a horror film. And it's like a family story parang one of the family members died, basically that's the plot. Nagbababang luksa ang family pero may mga mysteries, things that will happen throughout the movie."
Read Next
Read More Stories About
Sunshine Dizon, TV, television, GMA-7, Tinik Sa Dibdib
Post a Comment
Featured
Latest Stories
Trending in Summit Media Network