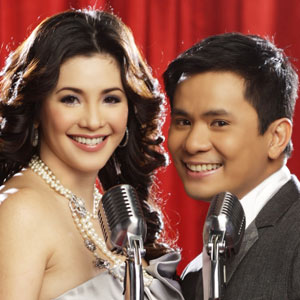 Who will be the second contender to be eliminated in Celebrity Duets 3? Find out on the September 26 episode of the GMA-7 reality singing competition hosted by Regine Velasquez and Ogie Alcasid.

Celebrity Duets 3, GMA-7's singing competition for the stars, held a non-elimination night last September 19, giving the eight remaining celebrity contenders one more week to enhance their vocal skills. Another round of eliminations will take place this Saturday, September 26. Who will exit the show after former beauty titlist Janina San Miguel?

First on stage was designer Maxie Cinco with singer and former child actress Aiza Seguerra. The two performed "You're The One That I Want" from the musical Grease. According to his staff, Maxie makes his own costumes and accessories. That night, he wore an Elvis-style wig and a pair of aviator shades, while duet partner Aiza was garbed in a white, curly, long wig complemented by a tight-fitting leather suit and red high-heeled pumps.

Following Maxie was photographer Niccolo Cosme who had sultry actress Ara Mina for a partner. They gave a faster and more upbeat interpretation to Jordin Sparks and Chris Brown's hit duet, "No Air."

Judge Freddie Santos admitted, "Weird song for me. Weird song choice. I wish there weren't too many things happening, para makapag-concentrate ako sa inyong dalawa," he said, bringing into light the moving staircases which the duo used as props. "The one thing, though, that I really appreciate is, Niccolo nagiging walanghiya ka na. Okay yun," he told the photographer.

Boxing champ Nonito Donaire, Jr. went from real-life punches to comedic punches this week, as he teamed up with YouTube sensations and comedy duo, Moymoy Palaboy. Nonito sang Shaggy's "Angel" with one-half of Moymoy Palaboy, while Roadfill merely acted in the background. The group had a massive YouTube window as backdrop, and Rastafarian-inspired costumes that seemed to mimic the Jamaican feel of the song.

After the performance, host Ogie Alcasid (who had to pull off a solo act with the absence of co-host Regine Velasquez this week) teased Nonito about opening for GMA-7's Sunday concert program, SOP. Nonito mimicked a Jamaican accent as a reply to this joke, which Ogie took as a cue to tease him some more about joining gag show, Bubble Gang.

It appeared that Ogie wasn't the only one impressed, for judge Freddie Santos was so awed, he even mumbled some Visayan words to Nonito. He then said, "That was so insanely wonderful. Really. Ang gaan, 'e! Talagang hanep."

Actor and concert producer Jomari Yllana rocked Tears For Fears' "Everybody Wants To Rule The World" with The Dawn frontman, Jett Pangan. The duo wore similar leather jackets to complete the rocker vibe.

Judge Tessa Prieto-Valdez was all praises for the actor. "You're so cool!" she told Jomari. "Every week you're getting so much better. Sobrang guma-gwapo ka na! Galing, the combination was so good," she noted, referring to the vocal blending that the actor whipped up with his duet partner. "I so love you! Good job!"

Next was multi-awarded actress and director Gina Alajar with actor Tirso Cruz III. Gina and Tirso danced and sang Donna Summer's "Let's Dance" in what appeared to be a ballroom-inspired performance.

Up next was beauty maven Mikaela and duet partner, Pinoy Idol grand winner Gretchen Espina. The duo performed Beyonce's "Single Ladies," complete with the original dance moves. Mikaela even went on to copy Beyonce's swimsuit-inspired costume, but adorned hers with glitter and some flashy accessories.

Despite the loud dance moves and costumes, Mikaela failed to impress the judges. Danny Tan confessed, "For me it was a disaster, actually. I think choice of song mo is a big problem, for me. Maybe you should re-think kung anong song talaga bagay sayo," he told the cosmetic surgeon, taking note of her previous song choices. "I really don't think you have the inner rhythm to get through these fast and dance numbers. It's just a matter of choice of song siguro."

Perfume line owner Joel Cruz went for a ballad this week, singing Josh Groban's "You're Still You" with balladeer Bo Cerrudo. Joel seemed to contrast the relaxed atmosphere with a cheerful costume, including a yellow overcoat and a cowboy hat.

Akihiro impressed judge Tessa so much, that she even asked for a signed poster of the model. "Akihiro, this is the best number yet. I so enjoyed it," she told the stunner. "Your voice was so much better. You're really enjoying. Pero alam mo, kulang pa rin. You gotta open more. Open more!"


Tessa's comment prompted Ogie to ask, "Are you saying that next week, he should take off his shirt?" Tessa happily agreed to Ogie's quip and added, "Grabe, boses mo, so much better. 100 percent," she told Akihiro, adding that the two other judges agreed to this.

Tune in every week as these singing celebrities compete for the title on Celebrity Duets 3, airing every Saturday on GMA-7 right after Pinoy Records.