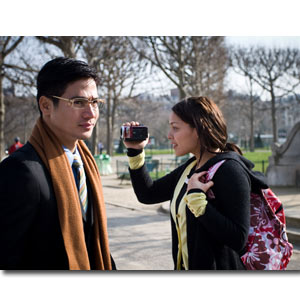 KC Concepcion (right) only has one wish after accepting the role of Vivian in the Pinoy adaptation of the Koreanovela Lovers in Paris. She says, "Now po, talagang first time ko sa teleserye. It's my wish na ma-accept nga ng tao na actress na ako." She will be paired with Piolo Pascual (left) who is cast as a businessman named Carlo.

Portraying a character that's already been done is not easy according to Piolo Pascual, KC Concepcion, and Zanjoe Marudo. They are the lead stars in the Philippine adaptation of the Koreanovela Lovers In Paris.

Since Lovers In Paris was successful when its dubbed version was shown in 2004, the three actors admitted that they're all nervous about playing the roles of Carlo, Vivian, and Martin.

On the other hand, KC said that the Vivian in Pinoy version would be different from the Vivian that the audience saw five years ago.

She said, "Vivian's character, given na siya, hindi na siya original, it's already been done. Pero iba pa rin kasi sa hitsura ko pa lang po ibang-iba na. She's not curvaceous and mestiza. Hitsura pa lang natin ibang-iba na so, that was really a challenge for me to give justice to the role."

For his part, Piolo (who is cast as Carlo), highlights the advantage of doing a role based on a Koreanovela.

He added, "For me, it's the biggest challenge because portraying somebody na napanood mo na, parang ginaya ang character na original. So, at first we're very strict but along the way, we were given leeway naman noong medyo okay na po ang characterization namin."

In summary, the show's head script writer, Ricky Lee, agreed that they couldn't just copy what was already seen in the Korean version.


SYNOPSIS. Vivian (KC Concepcion) is a struggling film student in Paris while Carlo (Piolo Pascual) is the head honcho of a company. They meet in Paris when Vivian applies as househelp to Carlo. When she gets the job, Carlo asks her to pretend to be his fiancé for a corporate event. And the romance blossoms from that one night. Martin (Zanjoe Marudo) is a relative of Carlo but he fights with the company president when he breaks the heart of Vivian.

Find out how Koreanovela Lovers in Paris was interpreted for local viewers in this Pinoy version that will premiere on September 28 on ABS-CBN's Primetime Bida.