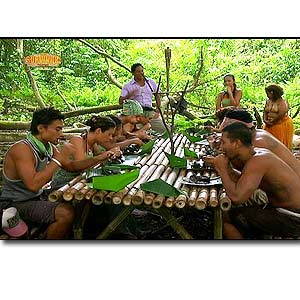 Team Koror won immunity for surpassing the exotic food eating challenge of consuming fruit bats. Koror and Airai of Survivor Philippines Palau also had to deal with the camp switching done on the island.

In episode 28 of Survivor Philippines Palau, the Koror tribe waited for Echo Caceres who had left the camp overnight. Echo was required to undergo medications after having allergic reaction from eating crabs.

Shaun Rodriguez recalled how Echo has been doing the daily camp chores early in the morning, but now that she's away they had to take her place.

Later, at the Crew Camp, Echo received a clean bill of health from resident physician, Dr. Samuel Ramos, following medical observation overnight. The doctor said that she no longer had any symptoms of the allergy.

After her medical condition improved, she went back to the camp where Jef Gaitan welcomed her in the forest.

At the Airai Camp, Cris Bolado and Louie Ang had a serious chat about their families.

THE KOROR BLOOD. Later, when Louie got to talk to Charles Fernandez, he tried to convince the raketista to vote off Cris if ever they would face the tribal council again. Charles agreed and they shook their hands. The raketista shared what he has witnessed during the reward challenge yesterday.

Louie was confident with his alliance with Charles. On the other hand, he was skeptic about Tara Macias's loyalty to the original Koror tribe.

THE SURVIVOR FLAVOR. Mika Batchelor picked the tree mail for her tribe, and then Tara read the message aloud.

Mika was quick to conclude that they were supposed to eat bats and dared her tribe mates if ever they could stomach the challenge. Everyone seemed to be ready.

At the Koror Camp, Jef read the tree mail message for the team. But they were not able to guess it right, as Echo thought it was a game of "pukpok palayok" or pot hitting.

PALAU'S DELICACY. Survivor Philippines Palau host Paolo welcomed both teams to their immunity challenge. He asked members of Team Koror to surrender the immunity idol and Cris to return the immunity bracelet. Paolo then proceeded to explain the challenge.

The TV host then presented a special centerpiece for the long table; it was a live fruit bat hanging on a branch.

Paolo called upon a Palau native, Beverly to demonstrate to the castaways the how to consume the nocturnal animal. They castaways could eat everything except the head and the bones. "It's more tastier (sic) than chicken," Beverly said.

Koror and Airai tribe members positioned themselves to have a random pair of castaways opposite to each other. They must eat two fruit bats all at the same time. Determining the winner between the competing pair depends on how clean their plate was after eating, which means, the individual with the least left-over wins a point for the team. The team to score at least three points from the total of five wins the immunity idol. The castaways are given two minutes to finish the challenge.

Louie was up against Suzuki. Amanda and Cris were the next pair. Tara and Echo were against each other. Marvin and Charles were head to head and finally, Mika and Shaun were the competing pair. Jef had to sit out for Koror.

The castaways had no qualms eating the fruit bats, and most of them said that the taste was tolerable, even delicious at times. But the most difficult part was trying to swallow the fur of the animal. Even the vegetarian, Marvin sacrificed his diet to accomplish the task.

After two minutes, the challenge was over. But Cris was seen throwing up.

THE JUDGMENT. After studying the leftovers, Paolo announced the result of the challenge.

Between Louie and Suzuki, Airai gets the first point. Louie was confident that he was able to outdo Suzuki during the challenge. Then Mika was declared the winner against Shaun to get Airai's second score. Between Amanda and Cris, Koror got an automatic point after the former basketball player threw up. Louie was so disappointed over Cris' performance.

Between Marvin and Charles, the vegetarian won the challenge, making the scores tied to 2 - 2. Echo was proud that Marvin was willing to sacrifice for the team.

Finally, it's up between Echo and Tara. Paolo announced that Echo gets the point and Koror snatched the immunity challenge, extending their winning streak.

Paolo once again instructed Koror to hand over the immunity bracelet to a member of Airai. After discussing it with the team, Echo returned the bracelet to Cris. While the former basketball player felt delighted with this development, Louie got even more disappointed.

However, Louie was right with his observation on Cris, as Mika eventually revealed the plan.

CAMP SWITCHING. After declaring the winner, Paolo announced another tribal switch. But this time, the teams must go to their new home, the rival's camp—bringing only what they have with their hands and leaving everything they have at their original camp.

Both tribes submitted to Paolo's instructions. But what the winning tribe, Koror didn't expect was what they are about to see at their new home.

The sight of the camp took a toll on Echo and Marvin, after realizing that all they worked hard for at their old camp would be enjoyed by Airai while they have to start all over again with their new camp.

Amanda also got dismayed with what she saw when she returned to her old camp.

Aside from the mess, Echo complained about the blunt bolo while Marvin had to kick the crate and threw some coconuts away to release his frustration.

Meanwhile, Mika was excited to go to Koror's camp for the first time, for a new environment.