Survivor Philippines Palau castaways battle it out for an underwater challenge 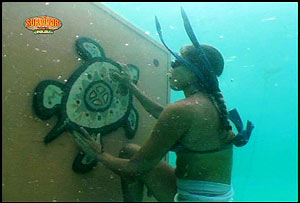 In Day 19 of Survivor Philippines Palau, Mika Batchelor of Airai struggled underwater to correctly place a piece for the underwater puzzle challenge. Unfortunately, the rival tribe, Koror, was able to win the reward consisting of juicy burgers and pizza!

On Day 19 of Survivor Philippines Palau, each tribe was made to swap items from each other while they fought against each other for a mouth-watering reward challenge: the chance to grill juicy burgers and eat pizza at their camp.


That morning at the Koror Camp, the tribe members had only coffee to start the day, as they couldn't cook a decent meal with their broken cooking pot.

Later, Echo noticed how Suzuki's looks drastically changed as the days passed by in the island.

But Suzuki never complained. He knew from the beginning that vanity has no room in this competition.

At the Airai Camp, the morning after the tribal council, the tribe members were already showing curiosity over the possible tribal merge.

"We're all expecting that to happen na may merge and may feast, but nothing happens," Tara said.

THREE PRECIOUS ITEMS. Charles and Echo got to the tree mail and read the message to their respective tribe mates. It said:

Tara understood that they were supposed to get three items from their rivals' camp, and they should also surrender three items, in exchange to which Cris agreed.

The Koror tribe talked about what items they should get from Airai's camp as they thought that nothing valuable could be taken from their present camp.

The ‘ambassador' of each tribe should inform one another what items they were going to swap. Amanda and Tara met at the middle of the forest.

Amanda was surprised to learn that the Airai tribe wanted to get their palayok and their flint.

But for Tara, it was just a fair swap.

Amanda returned and informed her tribe mates the items that would be taken from them.

Echo : "Ang gusto nila mag-suffer tayo. If they want the flint, that means we have to maintain our fire."

Shaun thought that the rival tribe wanted to cripple them for wanting to secure the valuable items.

After realizing that Tara remained as Airai's ambassador, the Koror tribe mates figured out that Louie was the latest person who got eliminated from their tribal council.

Suzuki admitted that he felt sad upon knowing that one of his earliest friends on the game already left.

At the Airai camp, before proceeding to the next challenge, the members packed all the things they could bring in anticipation of another camp switch or the merge.

UNDERWATER PUZZLE CHALLENGE. Survivor Philippines Palau host Paolo welcomed the teams to the site of the challenge. He presented to Koror the Airai tribe, minus Louie. But before Paolo explained the mechanics of the reward challenge, he asked the tribes about the three items they brought for the challenge.

Paolo then presented the reward: a sumptuous treat of pizza and hamburger patties that the tribe members could grill back to their camp. The castaways were elated to find out the reward, which they all agreed to be worth fighting for. Paolo also announced that the losing team must surrender the three items they brought to the winning team.

Koror had to sit out two members for the challenge and the team picked Suzuki and Echo.

Mika and Marvin began with the challenge. Both went over the platform and crossed over their respective balance beams then jumped to the water. Mika and Marvin were head to head as they get their first puzzle piece. Mika got the turtle while Marvin got the jelly fish puzzle piece. Both of them successfully placed the puzzle pieces to the box and swam back to tag their next team mate.

Marvin tagged Amanda who crossed over the balance beam carefully, then jumped to the water to get the turtle puzzle piece. Mika tagged Tara. As Tara crosses the balance beam, she almost fell if not only she was able to grab some ropes. Marvin and Echo jeered.

Tara dove into the water and swam towards her puzzle piece, while Amanda was already approaching the puzzle box.

Amanda had a difficulty placing his turtle puzzle piece, which kept floating in the water. Tara meanwhile was taking a longer time to place her starfish puzzle piece, so Mika coached her. Amanda was successful after standing on the box and swam back to tag her teammate, Shaun.

Paolo announced that if a castaway fails to place the puzzle piece, he/she could return and tag another member. While Mika was prodding her to just give up, Tara still tried to fit her puzzle piece but failed. She eventually gave up and swam back to be replaced by Charles.

Shaun meanwhile kicked his shark puzzle piece to fall into place and swam back to tag Jef.

Charles backstroked his way to get Tara's floating puzzle piece. Mika was already fuming as she shouted, "Stop f***ng backstroking! Look where you're going!"

Jef was able to get her manta ray puzzle piece after standing on top of the box. Charles eventually got the starfish puzzle piece into place then did another backstroke swim to the shore.

Charles tagged Cris, while Jef tagged Marvin. Cris got his puzzle piece first and swam to the box. Marvin got a starfish puzzle piece and tried to place it on its slot on the box. Cris got back to the shore first, while Marvin was having some difficulty.

Mika was next to get another puzzle piece and she was able to place the shark figure first while Marvin was still struggling to fit his starfish piece. He was being cheered by his teammates.

Tara was tagged. Marvin finally placed his puzzle piece on the box and swam back. The four members of Koror must then walk over the balance beam before diving to get the entire puzzle box.

Tara was having trouble getting the final puzzle piece to fit in the box. Mika and Charles were already screaming at her. But Tara seems to have gotten lost.

Tara said that finding the right side of the box was easy, but placing the piece was more difficult.

Meanwhile, Marvin took Jef's hand as they swam together.

Using the ropes,Team Koror was ahead, already dragging the puzzle box towards the shore. As they were getting nearer to the finish line, Tara was still struggling to place her puzzle piece. Koror placed the box on their mat.

"Koror wins reward!" Paolo declared to the distraught of the Airai team.

Koror did not only win three items from their rival tribe, they also feasted on the pizza reward. They also brought back to their camp meat patties, bread, vegetables, cheese and ingredients for their hamburgers.

Tara knew that she would be blamed for their loss, something that was already on Mika's mind.