Pinoy Big Brother Double Up will kick off on October 4 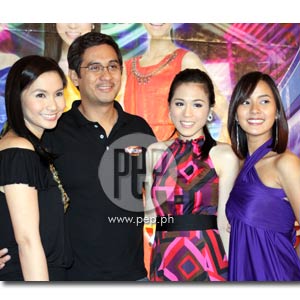 ABS-CBN's latest edition of Pinoy Big Brother doubles the fun and excitement when it begins its new season this Sunday, October 4. The team and face of PBB (from left) Mariel Rodriguez, business unit head Lauren Dyogi, Toni Gonzaga and Bianca Gonzales were all present at the press conference held on September 30 at Plaza Ibarra in Quezon City.

The word "double up" summons a lot of possible interpretations.

"Dobleng saya at dobleng intriga," ABS-CBN's Pinoy Big Brother business unit head Lauren Dyogi said to the members of the entertainment press when asked to explain the term "double up" in PBB's new season, which will open this Sunday, October 4.

Nevertheless, Dyogi's reply, though vague and anti-climactic, sums up the spirit of the popular reality television show—unclear, uncertain and thrilling, which is somehow contradictory given the show's concept of monitoring the participants day-to-day activities inside the house.

But there are certainly changes this time not seen during the previous seasons.

For one, Lauren excitedly mentioned the "expensive" renovation done inside the house's interior to give the program a new look.

NEW CAST, NEW FLAVOR. Pinoy Big Brother's appeal, however, doesn't depend much on the house interiors since the focus is mainly on the people residing inside the abode round the clock.

For the new season, Direk Lauren revealed that the team tasked to screen the aspiring housemates applied certain changes on the requirements and qualifications set in choosing the final lineup.

The housemates this season are interesting mix of individuals with varied backgrounds and characteristics—integral ingredients that Direk Lauren hopes to highlight as the season progresses all the way to the holiday season.

"The story will depend on who gives us a story among the housemates," he mentioned.

There won't be any changes though to PBB's resident hosts. Tasked to welcome the new members and update viewers are the trio of Mariel Rodriguez, Bianca Gonzales and Toni Gonzaga.

"Honestly kahit kami we don't know what to expect," said Bianca with a giggle to PEP (Philippine Entertainment Portal) in an interview after the press conference proper.

"I look to it na lang na parang sige I'll be excited na lang to find out on Sunday what double up means. Pero for sure it's gonna be super exciting because they keep saying na it's something that has never been done in any Big Brother around the world. As in una ang mga Pinoy so kaabang-abang talaga."

Stay tuned to Studio 23 for the weekly highlights inside the PBB house through the show PBB Weekend Primetime, which airs every Saturday and Sunday at 6:00 p.m. starting October 10. Watch raw footage from the house on Pinoy Big Brother Streaming at 1:00 p.m. beginning October 12.