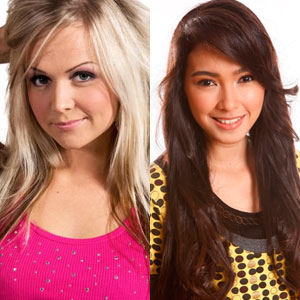 Kattlin Laas (left) is currently in the Philippines while Cathy Remperas is in Helsinki, Finland, to take part in the Big Brother Swap. How will the two deal with this development?

While families visited their dearly departed in cemeteries all over the country on All Saints' Day, loyal viewers of Pinoy Big Brother Double Up opted to watch the ABS-CBN show to catch a glimpse of Kuya's newest tenant.

Kattlin Laas of Finland, the blond 22-year-old housemate from Big Brother Finland, entered House A of PBB Double UP earlier tonight, November 1. The Finnish housemate arrived in the Philippines after traveling some 15 hours. Meanwhile, Cathy Remperas of Bohol also traveled all the way to Finland to take part in The Big Brother Swap.

Meanwhile, her Finnish counterpart Kattlin was given a warm welcome here in the Philippines. She arrived at the Big Brother house in Quezon City on board a white van. She was then instructed to sit on a hammock that was tied to a bamboo pole being carried by two men. Kattlin was carried on this hammock on stage, where she was interviewed briefly by PBB Double Up hosts Toni Gonzaga and Bianca Gonzales.

She was ushered inside to complete her first task in the PBB house. Big Brother asked Kattlin to view the two cross-stitch projects made by the housemates of House A and House B. After a few minutes, he asked Kattlin to choose the project that she liked the best and she picked the one with the sun's rays. It turned out to be the project of House A, meaning she would visit this house to meet the Pinoy housemates.

When she entered House A, the housemates were overjoyed to see her, since it meant that they won the "This is Stitch" task of Big Brother. This marks the first time that the PBB housemates have won against House B in the weekly task.

Cathy was part of the second batch of housemates to enter this season, turning heads with her simple yet beautiful features. Though a native of Zamboanga, she decided to settle down in Bohol. A licensed nurse and a passionate team player, Cathy has never shirked from any task. She has developed good relations with her housemates and has shown a high regard for trust and loyalty.

Will Cathy be able to make Filipinos proud in a foreign land? What tasks await her in Finland? Will she be able to fit in this new environment?

FORCED EVICTION. On October 29, the housemates were reduced in number when the "Young Widow ng Pampanga," Yhel Punzalan, was punished with forced eviction for repeated violations of Big Brother's rules, particularly that forbidding housemates to talk about whom they voted for in the last nomination.

THIRD NOMINATION NIGHT. Five nominees for eviction emerged last night, October 31: three from House A and two from House B.

Who among them will be evicted next week? How will Kattlin and Cathy deal with the Big Brother Swap?

Tune in to Uber with Mariel Rodriguez, after Banana Split Daily Servings, PBB Double Up with Toni Gonzaga after Dahil May Isang Ikaw, and PBB Uplate with Bianca Gonzalez. Also catch the live streaming on Skycable channel 150.