Castaways get chance to swim with dolphins and sharks in Palau 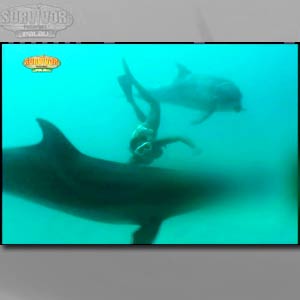 Amanda and Mika were able to swim with dolphins and sharks as a reward in Survivor Philippines Palau. Tonight, the five remaining castaways will battle it out for immunity through the "Reach the Top" challenge. CLICK HERE to join PEP's online promo.

Amanda Coolley Van Cooll and Mika Batchelor continued with the adventure package that they won in Survivor Philippines Palau. They had a chance to swim with the dolphins and later on, with sharks as well.
During this trip, Amanda told Mika about Jef's admission to her.

Moments later, the 'vacationers' arrived at the Dolphin's Pacific. The girls were excited to swim with the dolphins and felt as if they were kids again. Mika's father, Mike Bathcelor, said that he has always wanted to experience an encounter with the sea mammal for a very long time. Jovell Abogador, the husband of Mika's cousin, was also pleased by this opportunity to play with the sea creatures.

But Mika and Amanda were not the only ones having fun as the three castaways left at the camp decided to play "langit-lupa" (heaven-earth) to pass the time. After a round of "Ma-iba-taya," Jef was the "it" and run after Charles to tag him. Justine even thought of playing "Tarzan" as she swung away from Charles. Evantually, Justine gave up after feeling tired. But she enjoyed swinging so much and did it one more time.

Mika and Amanda took a couple of dives with two dolphins that joined them as they swam underwater and back to the surface. The program ended and the girls thanked the instructors for the awesome experience. Both Mika and Amanda were in awe of their "surreal" and "once in a lifetime" encounter with the dolphins.

Back at the camp, at the branches of a huge tree, Jef started to share stories about her childhood and told her how she missed out on fun experiences because of restrictions. She also felt insecure and was perceived as ugly.

DIRECTOR'S CUT. Anticipating Mika and Amanda's return, Jef and Justine concocted a plan to lead the BFFs into believing that Charles was already preparing for his exit.

They planned their "act" a little bit further.

Justine: "Pagkain or something."

JAWS. The next stop for the BFFs was the Shark City where they would get a very close encounter with sharks. Both of them were surprised seeing sharks in the wild.

The tour guide explained that the sharks were in their natural habitat and were just looking for food, but they never harmed humans.

"They're used to people before then they stopped it because it's so dangerous. They wanna see if they have something for them to eat. So they [the people] stopped feeding them so now they just swim around, checking," he said.

"So, you're going to make us swim with them?" Amanda asked.

Amanda checked the waters first but Mika was very eager to take the plunge with the creatures. The girls jumped together in the water wearing their snorkels. It was scary for them at first but they eventually enjoyed the sharks' company.

For Amanda, her adventure with the oceans' majestic and legendary creatures already made her a winner.

THE END. It was time to say goodbye for the castaways and their loved ones. For Mika, she knew that her dad, was so proud of her and the experience they shared together was truly one of the best times they spent together. Mr. Batchelor said that he had become closer to her daughter.

After tearful hugs and goodbyes, Mika thanked Amanda for choosing her and for being able to spend the vacation with her.

ACTION! Amanda and Mika got back to the camp late in the evening. Jef immediately greeted them and asked for stories.

But Amanda and Mika were careful not to tell how amazing their entire experience was to avoid making Jef all the more jealous.

Mika also told Jef and her best friend, Jolly and her dad, Mike already formed a bond. Mika promised that they would plan for Jef's birthday in Palawan.

Later, Justine and Charles were already acting out what they rehearsed.

Jef got and read the tree mail message the next morning. Justine figured out that they would probably build some ladder to get something at the top. The five castaways then went on to the site of their individual immunity challenge.

REACH THE TOP. Survivor Philippines Palau host Paolo welcomed the five remaining castaways and reminded them that whoever wins the immunity challenge would get a twenty-five percent shot of winning three million pesos and becoming the Sole Survivor. He then took the immunity necklace previously won by Amanda and explained the cost of the immunity bracelet she refused to receive to experience the Palau escapade.

The mechanics: There are five towers assigned for each of the castaways. The towers needed eight steps to form a ladder. At Paolo's signal, they would swim towards the color-coded markers in the sea. Below the markers are the ammo crates where they would open a padlock and get the planks from inside it. The planks would serve as the steps of the ladder. But to open the padlock, they must first look for the key buried on the sand. They must make sure that the planks would be placed on their right place through the tower. The castaway to reach the top first and let his/her flag rise up wins the individual immunity challenge.

Find out the continuation of the challenge in tonight's episode, November 5, 2009.

PEP PROMO. Two lucky PEPsters will have the chance to personally meet the Pinoy Sole Survivor. Registered users of PEP (Philippine Entertainment Portal) have until November 13, 2009 to enter their vote. CLICK HERE to join the online promo.