ON THE SET: Showtime 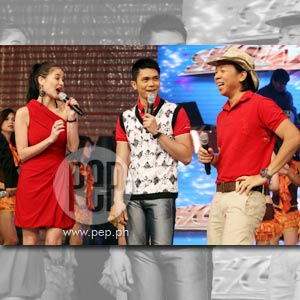 "I would have love to be one of the judges also, kahit hindi na host. Pero sabi ko, okay na rin 'yon kasi masaya," says Anne Curtis (left) who's very happy with her new morning show called Showtime. Her co-hosts in this ABS-CBN talent show are Vhong Navarro (middle) and Kim Atienza (right).

While waiting for the taping of her new projects, a movie with the tentative title Maybe This Time and a television series, young actress Anne Curtis is enjoying her break by hosting ABS-CBN's newest morning talent show program called Showtime.

Anne, who starred in the recently concluded primetime series The Wedding, said she made huge adjustments for this new show.

One major thing she has to do was to change her body clock, since she is used to having long taping schedules for a teleserye.

She also mentioned how much she liked the show, which was actually a bonus in her contract with ABS-CBN.

From Monday to Saturday, Showtime will showcase the unique talents of Pinoys by featuring performances of different groups who auditioned for the show. Then, it will have guest celebrities who will judge these groups with the show's resident judge stand-up comic Vice Ganda. It also allows audience members in the studio to give their rating for each group and to oust judges, too. (CLICK HERE to read related article)

Catch interesting Pinoy talents in Showtime before Wowowee on ABS-CBN. It airs at 10:45 am from Monday to Saturday.