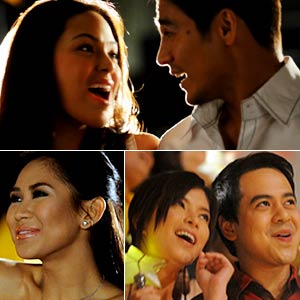 It's that time of the year again when the big networks ABS-CBN and GMA-7 partake of holiday cheer and reinforce the values of family and togetherness by unveiling their Christmas station plugs. The scale and production values of the holiday IDs have risen in direct proportion to the escalation of the network wars, becoming mini-movies in their own right.

The handles of the plugs themselves say nothing new on the surface-ABS-CBN's tagline is "Bro, Ikaw ang Star ng Pasko" while GMA's is "Sama-Sama Tayong Mag-PasaLove Ngayong Pasko." But this year presents a bigger challenge than years past: Coming from a particularly devastating typhoon season and a gloomy global economic outlook, the Christmas spirit has never seemed so far away for the Filipino audience...and never more needed.

This is perhaps the reason why both network holiday plugs have deliberately shy away from portraying lavish Christmas feasts or profligate gift giving, and instead focus more on acts of charity. In the GMA-7 plug, for instance, a family residing in a gated village come home--supposedly from a late party--and stop momentarily at the guard house so that the little boy in the backseat can drop off a present for the late-shift security guard. What's equally notable about the vignette is that nowhere in the production design do you see the car laden with presents.

The GMA-7 plug makes the admirable choice of not deploying their celebrities, instead highlighting the plight of ordinary Filipinos as they struggle to keep the Christmas spirit alive. There is nothing wrong with this creative choice per se...but it would have worked better if the plug itself had said something new, insightful, or impactful. There are vignettes showing a farmer worrying about his crop and getting a morale boost from a fellow tiller of the soil; an elderly woman getting a visit from loved ones; a pair of girlfriends walking home from a shopping trip who encounter a homeless mother and child curled up in a kariton. We've seen these vignettes--and their implied message of philanthropy and love--before. Are platitudes all GMA can offer us in these trying times?

The kariton vignette, in particular, feels tonally wrong. Yes, every little act of kindness goes a long way. Yes, it is wise to never portray the giving of money to beggars or panhandlers. But there is something vaguely Paris Hilton-esque about going on a shopping expedition with your BFF, then giving away a cardigan to the shivering child sleeping in the garbage cart. Like the rest of the plug and its generically clever message-Sama-Sama Tayong Mag-PasaLove Ngayong Pasko"--the act of charity seems to fall short; somehow it is not enough.

The ABS-CBN plug fares much better. While cynical viewers may hate themselves for getting taken in by the presence of a gazillion celebrities in choir formation a la "We Are the World," the formula undoubtedly works. But there are other formidable tricks up this mini-movie, as well. While the GMA-7 plug preferred to stay in well-trod territory by offering up a generic message of love and compassion, the ABS-CBN station ID zeroes in on something specific: the struggle to overcome the recent ravages of Ondoy and Pepeng. Interspersed with the images of Piolo Pascual and KC Concepcion singing and the subtle selling of the John Lloyd Cruz-Angel Locsin tandem as they get set for their new teleserye, we see workers tying up relief goods, a little boy picking up a parol and saluting army men as they go off on a relief mission, a community cleaning up a mud-strewn chapel. Powerful images, indeed.

Granted, there's something theologically unsound about the message (after all, isn't Jesus Christ the reason for the season?), and yes, station plugs are unabashed exercises in audience manipulation. But for the space of four minutes, it's touching to see celebrities pay tribute to the tireless relief worker, or the priest who is the moral center of his ravaged community. With this instantly catchy plug, ABS-CBN seems to be telling its audience that love isn't just needed this holiday season--it's something positively heroic.

Andrew Paredes is a freelance writer for YES! Magazine and SPOT.