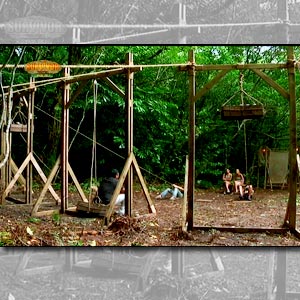 After holding up a 50-pound crate for almost five hours, Charles de Vera Fernandez won the final challenge in Survivor Philippines Palau. He has the option of getting immunity or getting a P2 million condo unit. CLICK HERE to join PEP's online promo to meet the Pinoy Sole Survivor.

The four remaining castaways of Survivor Philippines Palau woke up to day 38 the island. Charles de Vera Fernandez, Jef Gaitan and Justine Ferrer were separated from Amanda Coolley Van Cooll when they slept. Justine noticed that the "Probinsiyanang Tisay" was giving them the silent treatment.

Jef was crying when she said that she didn't want to think that she betrayed their friendship.

Amanda said that she felt betrayed but she was particularly angry at Charles.

Later Charles got the tree mail. He read:

The castaways then reached the site of their final immunity challenge. Charles placed the Sonsorol flag on its post and Amanda handed over to Paolo the immunity necklace, which was up for grabs for the very last time.

SP Palau host Paolo Bediones then explained the mechanics of the game.

At his signal, the four castaways have only ten seconds to position themselves before pulling a rope attached to a crate weighing 50 pounds. They must pull and carry the crate behind a wooden marker. After their initial position, the endurance challenge starts. The castaway who holds on to the crate the longest before falling or before they crossed the wooden marker would win the immunity.

But Paolo had a special announcement to make the challenge "sweeter" leaving the castaways stunned with surprise.

The four castaways would also get the chance to win a condominium unit from Lauriano de Trevi Towers, care of Camella Prestige. The particular unit was located at the business district of Makati City. It is worth a whopping two million pesos, definitely worth fighting for.

For Charles, it would be a dream come true to have his very own condo unit. Meanwhile, it wouldn't matter for Jef anymore if she reaches the top 3, but to win the condo has more weight for she would give it to her parents. As for Amanda, she was unsure if she would get the jury votes in the end but winning the condo would already make her parents and loved ones proud of her. Amanda was teary-eyed before the challenge started.

Jef was sitting down on the muddy ground to pull the crate up; Amanda used one hand while Justine was leaning back. She struggled but recovered quickly, Charles looked relax. Eventually, the three girls were already in a sitting position. Charles adjusted to use one hand. His feet were the farthest from the marker. After twenty minutes, Justine was laying down.

Paolo reminded the castaways that one small mistake can cost them the game and they must make sure to give it their all.

Elapse time was 30 minutes. Jef suddenly lost her hold of the rope. Her official time was 31 minutes.

Jef admitted her disappointment after not being able to do her best even at the last challenge.

The challenge continued for the remaining three castaways. Justine was on the ground, Charles was adjusting his position. Minutes later, Justine struggled until her crate fell.

After one hour and thirty minutes, the last two challengers remained steady and strong.

Paolo announced that the official time was two hours and thirty minutes.

Paolo announced that the elapsed time was three hours and fifteen minutes. Charles was seen peeing in his shorts.

After four hours, it rained. After another thirty-five minutes, Amanda was already complaining and wanted to give up.

After saying "Ayoko na" Amanda let go of the rope.

Charles jumped and cried out "Lord thank you!" wept and kissed the ground. Amanda was also seen crying.

Paolo then reminded Charles his options that he would decide upon during the tribal council the coming night. He had to choose between a guaranteed spot for the final three and a chance to become the Sole Survivor or own a condo unit worth two million pesos.

Charles recalled his triumphant moment. The "Raketista" is determined to own a brand-new condo-unit.

While Amanda cried for her loss.

"Naiyak ako kasi nga like I gave my all... I gave my best and it wasn't good enough. So and I was a little bit disappointed kasi nga hindi ko siya natalo, na alam ko kaya kong talunin 'yun e, pero this time it wasn't for me," Amanda said.

Charles hugged Jef and Justine. Justine showed her pinky sign while Amanda was covering her face.

JEF'S PLEA. The four castaways went back to the Sonsorol camp. Amanda went straight to the beach to wash her clothes.

Justine then showed her pinky sign, which meant that the JJC alliance should stick to their plan against the BFFs. But Jef had something else in mind. She pleaded to Justine to allow her not to vote off Amanda during the tribal council.

But Justine and Charles discouraged her, since it would become a tie vote between Amanda and whoever.

Later, Justine and Jef talked in the forest. Jef said that she felt that would rather be voted out than Amanda.

Justine: "You're so sad naman."

But for Justine, she'd rather be against Jef and Charles for the final three.

In the shelter, Amanda was assuring Charles that she's already fine with whatever would happen.

JEF IN THE MIDDLE, AGAIN. Jef was once again the swing vote, the deciding factor if she would receive the immunity necklace from Charles.

Charles joined the conversation. He knew that Jef could turn against him despite giving her the immunity necklace.


PEP PROMO. Two lucky PEPsters will have the chance to personally meet the Pinoy Sole Survivor. Registered users of PEP (Philippine Entertainment Portal) have until November 13, 2009 to enter their vote. CLICK HERE to join the online promo.