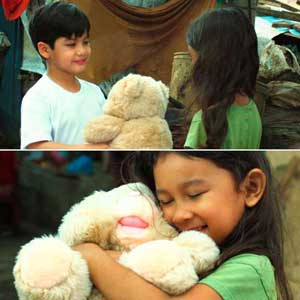 The creative team behind this project said that it was really part of the plan not to include GMA-7's roster of talents in this year's Christmas station ID.

"What we wanted to do was to usher the viewer to the true meaning of Christmas-parang not just to please the eye but to touch the heart," said Candy delos Reyes, writer/lyricist of GMA-7 Program Support's creative team.

She further explained, "Kung mapapansin niyo po, we veered from the usual execution na may celebrities. Noong una kasi, parang we wanted to come up with something that we can't do every year. In a way, it was actually a big step for GMA7, being one of the broadcasting networks, to usher the viewers towards the deeper understanding the real message of Christmas."

Ding Achacoso, director of photography of this station ID, said that it was also good to feature ordinary people in this project to be able to project the reality in each vignette.

He said, "When you're shooting a star, it's actually a problem kasi mayroon ka pang taping, mayroon ka pang scheduling, you know, this is the reality. And, you know, because of all these things, nale-lessen 'yong focus noong palabas. So, actually, when we took this opportunity, parang, 'Wow, we have a chance, and management approved of it, na walang talent.' So, we were able to tell the story the way we want it."

The creative team met with select members of the press yesterday, November 11, at the 17th floor of the GMA Network building to talk about the station ID of the Kapuso Network. The team deliberately used darker mood lighting in some of the scenes to heighten the emotion they want to portray.

"PASALOVE" The team also used the coined word "pasalove," which was the main idea of the project's tagline: "Sama-sama tayong mag-pasalove."

DRAMATIC SCENES. It's also noticeable that instead of portraying the usual "happy people" on the station ID, dramatic scenes were used to expressed the meaning of Christmas.

Director Paul Ticzon said that vignettes that they used in the station ID were used not to remind the tragic incidents that happened when typhoons struck the county.

He said, "Actually, it wasn't to bring back the trauma of the past calamities. But, actually, to celebrate those little acts of passing love that happened during the darkest hour. Kumbaga, that help us get through it. This is actually what we want to celebrate and recognize doon sa mga vignettes that focus or shows 'yong mga nasalanta na areas and family."

He also noted, "It's not your typical Christmas station ID na masaya, ganyan. But if you watch it and pay attention to it, you will feel good after. It's those little things that we want to show in spite and despite of 'yong mga nadaanan ng mga taong ito, mga naranasan nila. We want to really show na kahit na may ganyan, 'yong mga maliliit na bagay, it can mean a world of difference to these symbols."

GMA Network aims to celebrate Christmas by sharing love through its "Sama-sama Tayong Mag-pasalove" station ID, which will air every now and then this Yuletide season.