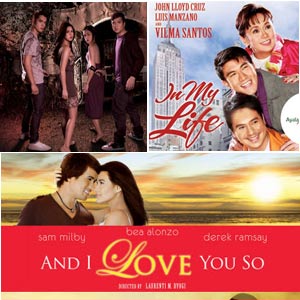 According to an investor report prepared by ABS-CBN, the Star Cinema films (from upper left, clockwise) Villa Estrella, In My Life and And I Love You So raked in P282 million in box office receipts.

Based on a report from ABS-CBN, consolidated airtime revenues of the Kapamilya Network showed a 5 percent increase compared to last year, translating to P10.68 billion in the first nine months of 2009.

In a press briefing held last week, Head of Corporate Planning and Investor Relations Charles Gamo disclosed that in the third quarter alone, ABS-CBN earned P3.96 billion in airtime revenues for an average of P1.32 billion a month.

ABS-CBN Global, the international arm of the Network, experienced double-digit growth as its subscription revenues managed to grow by 15% year-on-year despite economic slowdown in most of its major markets.

Star Cinema, the production arm of ABS-CBN, released three film during the third quarter. These films--Villa Estrella, And I Love You So, and In My Life--pulled in a combined P282 million in box office receipts.

The ABS-CBN report also revealed that consolidated direct sales for the third quarter including sales of services from Skycable totaled P2.7 billion, for a 6 percent year-on-year growth. Skycable's revenue contribution for the nine-month period from subscription and other service revenues amounted to P2.65 billion, an increase of P932 million or 54 percent from its contribution in the same period in 2008, driven by strong growth in contributions from Skycable's prepaid cable and broadband service subscriptions.

Charles Gamo also included notable achievements of ABS-CBN shows based on data from Taylor Nelson Sofres. In the TNS National Urban Philippine TV ratings service for the third quarter, ABS-CBN kept its total day ratings at the 18-point level versus GMA-7's 13-14 points while its national total-day audience shares stayed at the 46-47 level, maintaining a double digit lead over GMA-7 of at least 11 percentage points.

Meanwhile, primetime ratings of ABS-CBN stayed at the 30-points level with a 9-10 point lead against its rival network. The primetime audience share of Kapamilya Network also continues to remain at the 50-51 percentage-points level.

During the month of October 2009, ABS-CBN had 17 of the top 20 programs nationwide. Shows launched in the third quarter--Katorse, Lovers in Paris, Dahil May Isang Ikaw, and Agimat: Ang Mga Alamat ni Ramon Revilla-made it to the top 10 while shows related to Pinoy Big Brother Double Up entered the top 20 list.


PRODUCTION COSTS INCREASE. According to the report furnished by ABS-CBN, the production costs for the first nine months of 2009 reached P4.65 billion. This represents a 4 percent increase compared to the same period last year. The report attributes this rise to the launch of an additional locally produced afternoon soap and a late-evening entertainment news program.


Cash production costs of the Kapamilya Network reportedly went up by only 2 percent or P86 million to P3.59 billion in the first nine months of 2009. Additional depreciation expenses arising from continuing investments in the upgrade of production and broadcast equipment caused non-cash production costs to go up by 9% to P1 billion.

Consolidated General and Administrative Expenses (GAEX) of core businesses for the nine months to September 2009 totaled P5.6 billion for the nine-month period, for a year-on-year growth of 18%. Total GAEX of core businesses went up by P150 million or 12% in the third quarter to P1.43 billion, reportedly due to "higher personnel expenses as a result of structural adjustments, CBA increases and non-recurring payouts." Skycable's 3rd quarter contribution to total GAEX amounted to P527 million.

Total group spending on capital expenditures (CAPEX) and film and program rights acquisition inclusive of Skycable's CAPEX reached a little over P2 billion, P381 million or 23% more than the spending over the same nine-month period in 2008.

The report also pointed out that Skycable's self-funded CAPEX of P590 million over January to September period was used for "the continuing conversion to digital cable signal delivery within its service areas and for its broadband network."

Earlier this month, GMA-7 released its own financial report, which can be read by CLICKING HERE.