PBB Double Up housemates feel the wrath of "Typhoon Walay" 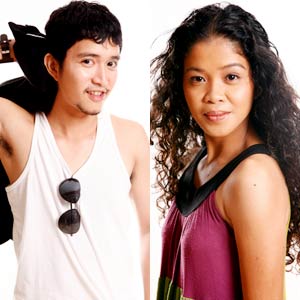 Melisa Canteveros and Jason Francisco are forced to live in different houses in Pinoy Big Brother Double Up. How are the two dealing with this situation?

The wacky tandem of Melisa Canteveros and Jason Francisco in Pinoy Big Brother Double Up was torn apart by "Typhoon Walay," a twist that sent the girls of House A to House B and vice-versa. Walay is actually short for hiwalay or separation.

The two, who had been joined at the hip since they met each other inside the house, are now trying to get used to being without each other.

But Melai and Jason aren't the only ones missing each other. Other housemates have also shown their longing for their true housemates. Upon moving into House A, the house B girls went to the common wall and did the House B cheer, which the House B boys also did upon hearing them.

Meanwhile, the House A boys also kept wondering if their friends were alright with their new guy housemate, and wondered if they were missed. Surely enough, the House A girls thought nothing but the good old times with them. Melai, missed her small talks with Jason and worried about who will take care of him. Rica Paras, on the other hand, missed the boys since they treated her there as one of the girls.

Carol Batay, on the other hand, felt reunited with her old buddies in her old house most especially Hermes Bautista. Cathy Remperas also felt comfortable hanging out and chatting with her new-found friends.

House B girls Yuri Okawa, Marielle Sorino, and Kath Lopena-Ortega, meanwhile, got a warm welcome from the House A boys who cleaned the house and even prepared a late dinner for the new girls.

Meanwhile, apart from adjusting to new housemates, Jason, Carol, Rob Stumvoll, and Patrick Villanueva are also busy making most of the week as they are all nominated for eviction.

Join Mariel Rodriguez in Uber after Banana Split Daily Servings, Toni Gonzaga in PBB Double Up after Dahil May Isang Ikaw, and Bianca Gonzalez in PBB Double Uplate, every after midnight. Catch the 24/7 live streaming on Skycable Ch. 150.