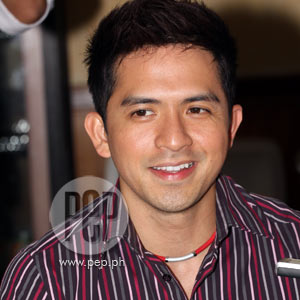 As a child, Dennis Trillo was very naughty, "makulit" and "maloko."

And although the Metro Manila Film Festival Best Actor award-winner is already 28 years old, he admits that his "immature" side still remains with him.

This is why the actor did not find it hard to portray his role in SRO Cinemaserye presents Exchange Gift. Directed by Mac Alejandre, and also starring child actor Francis Mangundayao, Exchange Gift is GMA-7's newest offering for the Christmas season.

In Exchange Gift, Dennis plays Miguel, a workaholic who does not even reserve time for himself. One day, his best friend (played by Neil Ryan Sese) comes to his house asking for a favor. He leaves his son EJ (Francis Mangundayao) in Miguel's care because he has to go abroad to work.

EJ's father dies unexpectedly, and Miguel decides to take EJ to an orphanage, since they don't get along well. But an unexpected gift from Santa Claus turns their world upside down. One morning, the two wake up in each other's bodies. Miguel becomes EJ, EJ becomes Miguel.

Dennis said he enjoyed taping Exchange Gift not only because he got in touch with his inner child, but also because Direk Mac made things easy.

His co-star was not hard to work with either. Dennis said Francis Mangundayao is a good actor.