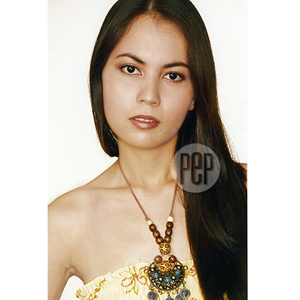 After being nominated for the third time, Jayna was the one voted out of the modeling reality TV series Philippines' Next Top Model.

On the sixth episode of Philippines' Next Top Model, party and fun master Tim Yap visited the eight remaining finalists to give them a workshop on publicity. As he was about to start his lecture, he asked each candidate to choose a prop from the suitcase that he brought.

When the finalists got their own items—including a mask, helmet and even a crown—the lifestyle guru discussed the collaboration between models and stylists in endorsing a particular product. He ended his session by talking about the right attitude that an aspiring model must possess in order to succeed in the fashion industry.

After Tim's lecture, the girls were treated for a shopping spree at a high-end clothing shop at theMall of Asia. Right after the mall visit, they prepared themselves for a night-out party with Tim Yap at the Embassy. Each finalist showed their own party style while enjoying the fun, the drinks, and the music at the Embassy dance floor. However, the girls were unaware that Tim was watching their every move to see if they really applied the lessons that he taught them on their workshop.

While some of the girls were still having hangovers from the party, Ruffa texted them for their next photo-shoot challenge. At the photo studio with Vince Uy, the girls were instructed to pose projecting the different scent attributes such as romance, seduction, glamour, and mysteryof a well-known perfume brand for their first product endorsement shooting.

After the photo shoot, the girls were called to the Celebrity Plaza for their performance evaluation and elimination round. But before the evaluation begun, Ruffa showed the girls through a VTR the assessment of Tim Yap regarding their attitude at their night-out party.

During the evaluation, almost all of the girls were given merit by the judges—Ruffa Gutierrez, Vince Uy, Wilma Doesnt, Robby Carmona, and Xander Angeles—for their outstanding performances, especially on their photo shoot. However, Bambi and Jayna were criticized for their unimpressive photo-shoot.

On the elimination round, Bambi and Jayna landed on the bottom list. After being nominated for the third time, Jayna was the one voted out.

Don't miss the next episode of this modeling reality TV series in the country as the seven remaining finalists meet former top model and today's most sought-after image consultant—Olen Juarez-Lim AICI (Association of Image Consultant International)—to share with them her modeling secrets and projection techniques.