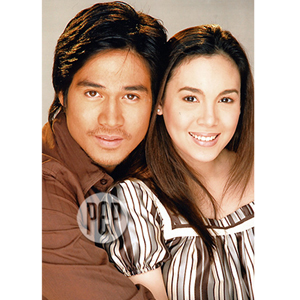 Noel (Piolo Pascual) and Melanie (Claudine Barretto) are stepsiblings who fall in love with each other in the ABS-CBN teleserye Walang Kapalit, which premieres on April 23.

What if you fall in love with someone, but society considers your love taboo?

This is the problem facing Noel (Piolo Pascual) and Melanie (Claudine Barretto) in the ABS-CBN teleserye Walang Kapalit, which will air starting April 23.

Piolo and Claudine reunite for the small screen after making their blockbuster hit Milan. The two had previously worked together in the TV show Buttercup, where they starred as Lance and Meg.

Now that they are paired again, Piolo was asked how was it like to work with a pregnant Claudine. "It's really been easy to work with Claudine ever since but I think mas lalo pa siyang bumait ngayon. We're extra careful during the shoot because she's pregnant but she is a professional," he said during a press con of Walang Kapalit. "Ang gaan pa rin niyang katrabaho."

Claudine is on her pregnancy's second trimester, and by July, she will give birth to a baby boy with actor-husband Raymart Santiago. For her part, she reveals that Piolo also spoils her on the set, which is why she enjoys their tapings together.

In Walang Kapalit, Dina and Edu play the married couple Agnes and Ariston, who are both into their second marriage. They each have a child from their first marriage: Melanie (Claudine), Agnes's child from her former husband, and Noel (Piolo), Ariston's son by his late wife.

Noel and Melanie grow up as brother and sister. The young Noel is played by Sam Concepcion while the part of young Melanie went to Julia Barretto. They bicker and quarrel throughout their childhood. But when Noel leaves for Australia to work, they discover how much they miss each other.

Love blossoms between the two, although this is against the wishes of their parents. When they grow up, they learn to be more appreciative of each other but they end up marrying other partners, played by Jodi Sta. Maria and Bobby Andrews.

Eventually, Ariston, Noel and Melanie had to join Noel in Australia when he needed help to recuperate from a car accident.

"It took us about eight months bago matapos ‘tong project," narrates Piolo about his latest teleserye on the Kapamilya network. "We were there in Sydney for only a couple of days and then we went to Hunter Valley...[it's] super nice. Para siyang vineyard and we did scenes there with Jodi [Sta. Maria]."

Find out how Melanie and Noel fight for a love that is, in society's eyes, between two siblings. Walang Kapalit premieres this Monday, April 23, on ABS-CBN's Primetime Bida.