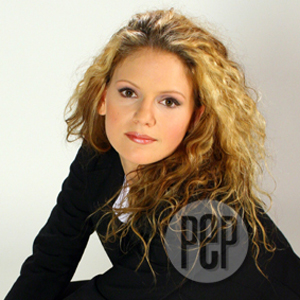 With a height of 5 feet 8 inches, Tina Semolic towers over most of the Pinoy Big Brother Season 2 housemates. Wearing the national costume of Slovenia, she was introduced to the housemates last night, April 21.

Positive. This is the adjective that Slovenian Big Brother housemate Tina Semolic used to describe herself when Toni Gonzaga interviewed her last night, April 21, moments before she entered Kuya's house. Filipino viewers will get the chance to see if her description is accurate now that Tina has entered the Pinoy Big Brother house for one week in the first Big Brother Swap done in the country.

When asked to give her first impression on the Philippines, the statuesque 22-year-old told PEP (Philippine Entertainment Portal): "There are many islands. Food is great. There are fresh fruits and vegetables. And also Filipinos are rice eaters, which I also like very much, and people are very warm and always smiling."

Tina is a Tourism student from Koper, Slovenia, who has a definite love for sports. Tina is an enthusiastic skier, runner and cyclist, all of which resulted in her head-turning figure. She weighs 129 lbs. and stands 5'8" tall. Like many Pisceans, Tina discloses that she adapts well to other people, is always full of energy, and never runs out of things to say. Because of her natural beauty and effervescence, Tina has also distinguished herself in beauty competitions in her native country, winning a title in a TV competition for a TV hosting gig. Her upbeat attitude has also served her well in Slovenia Big Brother. In fact, during her five-week stay in the reality program, Tina has never been nominated for an eviction.

Although very open to new experiences, Tina reveals that she has no intention of ever developing a romance with any housemate, here or in Slovenia, because she is very much in love with her boyfriend Zeljko.

As a child, she used to be very obedient, well behaved, and tranquil, but she developed a stronger character and a better-defined personality as she got older. Tina's life significantly changed when her father died when she was just two years old. This heartbreaking incident made her fiercely protective of the people she loved, especially her family.

According to Tina, she grew up among strong women—her mother, aunt, sister, grandmother, and her mother's friends—all of them survived many hardships in their lives, influencing Tina to become stronger emotionally. Apart from her boyfriend, the most important bonds for Tina are the ones that exist between herself, her mother, and her sister. "There is a special energy among us, which I wish to protect at any price as it is so precious to me," Tina says. She also values her own strength. "I believe that the things that don't break you in your life make you even stronger and today I am a very strong girl."