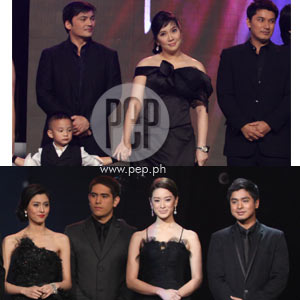 After the shocking plot twists in Tayong Dalawa, ABS-CBN will soon present soap opera characters that are expected to "defy the laws of love."


Under the direction of three directors—Erick Salud, Trina Dayrit and Dondon Santos—Kung Tayo'y Magkakalayo has the elements of action, family drama, and romance. It tackles how an individual's love for another is put to the test and how destiny can disrupt one's life.


As Celine, Kris Aquino will be paired with two leading men: Gabby Concepcion (Steve) and Albert Martinez (Frank). Her character will have to deal with the complicated situations that life has given her and find a way to correct the mistakes that she did in the past.


Kimerald fans are also in for a treat as Kim Chiu and Gerald Anderson are part of this primetime TV show, which features the theme song performed by Gary Valenciano. Initially, Gwen (Kim Chiu) and Robbie (Gerald Anderson) treated each other with disdain but fate finds a way for them to develop a close bond with each other.


Adding color to this this soap opera are veteran stars Jaclyn Jose as Astrud, Gina Pareño as Petulah, and Ms. Gloria Romero as Celine's mother named Barbara. Maricar Reyes is tapped to portray Selina, who will eventually be the love interest of Gabby Concepcion and Coco Martin as Ringo, the half-brother of Kim's character. Maxene Eigenmann is cast as Alicia, the other love interest of Gerald.

Synopsis. Kung Tayo'y Magkakalayo revolves around Celine (Kris), an obedient wife to Frank (Albert). All she ever wanted was to be in a happy family. But her marriage to Frank was not blessed with a child. Her hopes for a complete family are shattered when the airplane that Frank was flying in was lost at sea.


Celine is comforted by the presence of Steve (Gabby) and they end up making love to each other. But Frank returns to her life since he managed to survive the accident. The lovers part ways and Celine lets Frank believe that Gwen is his child when she is actually the offspring of Steve.

Steve moves on with his life with his new partner Selina (Maricar). However, the truth about Gwen's real identity comes out. How will they all deal with this complicated situation?


Celine (Kris Aquino) is the obedient wife of Frank (Albert) and an overbearing mother to her daughter Gwen (Kim).

Steve (Gabby Concepcion) is an NBI agent who had a intimate relationship with Celine in the past. As a result, Celine and she bears a love child that Steve does not know of. Years later, he learns the truth from Celine herself. Gabby and Kris shot a love scene for this teleserye and the former matinee idol also studied how to handle guns for his role as an NBI agent.

Frank (Albert Martinez) is a good provider of material things but lacks warmth and concern for his wife. He is frustrated with Celine since their attempts to have a child always failed. He is believed to be dead because of a plane crash but he manages to survive the ordeal.

Gwen (Kim Chiu) is a rebellious daughter who grows up hating her mother. She despises Celine and her perfectionist ways. Meeting Robbie changes everything in her life.

Robbie (Gerald Anderson) has always had a high regard for Steve. When he was young, his parents were killed. It was Steve who saved him and later on adopted him.

Petulah (Gina Pareño) is Frank's mother. She loves Frank so much that she's willing to do anything for him. She wants nothing more than what's best for Frank and his family.

Astrud (Jaclyn Jose) is Frank's mistress who bears him a son named Ringo. Gwen finds in her the mother she had always wanted.

Ringo (Coco Martin) is Frank's son with Astrud and the half-sister of Gwen. He is mentally unstable and has a violent streak.

Alicia (Max Eigennman) is a police officer who is infatuated with Robbie.

Aside from Ms. Gloria Romero who plays a special role as Barbara, Celine's mother, viewers should also watch out for the special appearance of Baby James (Kris Aquino's son).

Kung Tayo'y Magkakalayo is one of the offerings of ABS-CBN in time for its campaign celebrating 60 years of Pinoy Soap Opera. Don't miss its pilot episode this Monday, January 18, on Primetime Bida.