Kenny, Dice shine in ABC-5's "Shall We Dance" 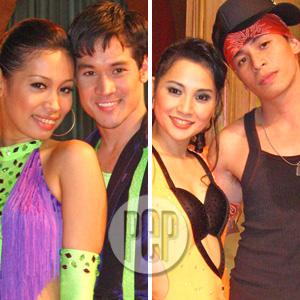 (From left) Dance partners Teytey Tadeo and Kenny Waymack as well as Vemine Cordero and DiceSy were named as the best among the six pairs that competed recently in ABC-5's reality show Shall We Dance.

It takes two to tango but it takes more than just the dancing skills and good looks to shine in Shall We Dance (SWD). You have to have the passion, determination and the right attitude to stand out in this reality dance show.

Last Sunday, April 22, after four grueling weeks of rehearsals and tough competition, the show's host Lucy Torres-Gomez announced the two winners of batch one. Kenny Waymack and Dice Sy with the help of their respective partners, Teytey Tadeo and Vemine Cordero, proved that they have what it takes to be the country's next dance superstar.

NEW TAGLINE. Shall We Dance kicked off its fifth season with a new tagline—It's Your Time To Shine—and a fresh batch of non-celebrity contestants but with exceptional skills vying to be the next dance superstar.

The three resident judges—Regine Tolentino, Audie Gemora, and Edna Ledesma—handpicked the 12 finalists out of the hundreds who auditioned in SWD. Twelve individuals from different walks of life are all trying to prove that they have what it takes to shine on the dance floor. The twelve competitors were paired with professional ballroom dancers to help them master the intricate steps of ballroom dancing.

BATTLE OF THE BEST. On Day One of the competition, batch 1 was immediately put to test while the batch 2 took a back seat first as they would compete in SWD only after batch 1 is finished.

The six pairs of batch 1 had no time to waste for they know that at the end of the day one pair would have to go. The judges praised Dice's "attitude" on the dance while they liked Kenny's versatility. After tabulating the scores, Mel and D.I. Larry were sent home while Dice and Vemine got the highest score.

On Day Two, after an intense battle on the dance floor, Rosanne and D.I. Rodel were eliminated as they didn't quite execute their routines well. Peewee and D.I. Oliver who thought they would be the one to go home next since they received the harshest criticisms from all the judges, were given another chance. Kenny and Teytey who played Justine Timberlake and Britney Spears on the dance floor top the ranking that night.

By Day Three, it became apparent that chemistry is the biggest problem of Peewee and Oliver. By this time, the judges did not overlook this fact, making them the third pair to leave the competition. If chemistry is missing in the partnership of Peewee & Oliver, Kenny and Teytey have no worries because their partnership is very solid and they helped each other out in coming up with the steps.

But at the end of the day Dice once again dominated the dance floor after he and partner Vemine got the highest score while Kenny and Teytey were in second place.

Last week, the three pairs remaining proved why they made it that far. All of them were very determined but one of the pairs must go. In the end, Chris and D.I. Susan were sent home, leaving Kenny & D.I. Teytey and Dice and D.I. Vemine as the last two pairs standing to compete in the finals. The winners of this batch will have to sit back, relax and wait for the chance to compete with the champions of batch 2. The grand championship night of Shall We Dance is scheduled to be held in June, wherein the winning pair will take home P200,000 plus other special prizes.

This Sunday, April 29, marks the beginning of batch two's turn to battle it out on the dance floor. Who will shine and who will go?

Catch all the action in ABC-5's reality dance competition, Shall We Dance, hosted by dance goddess Lucy Torres-Gomez with co-hosts Dominic Ochoa and Arnell Ignacio every Sunday at 9 p.m.