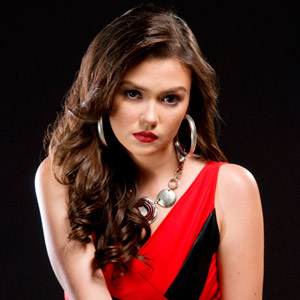 Angelica Panganiban will portray the bida-kontrabida title character Rubi in the Philippine adaptation of this Mexicanovela. The role went to her when Kristine Hermosa declined to do the role for being "too daring." Watch Angelica's sensual character in this ABS-CBN primetime soap opera starting February 15, 2010.

Angelica Panganiban went through the ladder of success without skipping a single step, thus, her nearly 18 years of experience in the entertainment industry have sharpened her skills in the acting department. For this reason, she has been tapped to play the bida-kontrabida lead character in Rubi, which is one of the biggest teleseryes of ABS-CBN in celebration of its 60 years of Pinoy Soap Opera. The Filipina Rubi met with the press last January 26 at the 14th Flr, ELJ Building, ABS-CBN compound.

ORIGINAL RUBI. Rubí is originally a Mexican telenovela aired on TeleVisa network in 2004 that topbilled model-turned-actress Bárbara Mori. The plot is based on a story by Yolanda Vargas Dulché. The said telenovela was first aired in 1968 portrayed by Fanny Cano, a well-known Mexican actress and producer.

Mori was born in February 2, 1978 with a Uruguayan-Japanese and Mexican heritage. She started as model at the age of fourteen when she was discovered by a fashion designer then eventually ventured into acting. Mori made her acting debut in the Mexican telenovela Al Norte del Corazon in 1997 and landed her first leading role in the series Azul Tequila in 1998 until she portrayed Rubí Pérez de Ferrer in the highly-rated Mexicanovela Rubi which reaped awards including Best Female Protagonist for Mori.

Rubí was a huge success in many countries. Apart from Latin America, the telenovela garnered high ratings in the United States, Malaysia, Israel, Eastern Europe and the Philippines, among many others.

PINAY RUBI. Rubi became a television hit in the Philippines when it was aired by ABS-CBN on its daytime slot in 2005. Despite its timeslot, the drama seriesstill managed to reach primetime-series-like ratings. Recently, the Kapamilya Network has acquired the TV rights for its Philippine version. Angelica Panganiban will bring life to the Pinay Rubi starting February 15, 2010.

Viewers have known Angelica as member of the elite circle of homegrown talents of ABS-CBN since her showbiz career started at the age of 6 in Ang TV. She was also cast in ABS-CBN shows such as Berks, Vietnam Rose, Rounin, Ysabella, Maging Sino Ka Man: Ang Pagbabalik and Iisa Pa Lamang. Angelica feels very lucky to be given the biggest break on her television career because of Rubi. "Natutuwa ako kasi ang tagal ko ng artista. Simula last year, na-feel ko artista pala ako ng ABS-CBN kasi nabigyan ako ng importansya," she said with a smile.

She proved her versatility as an actress when she portrayed the socialite villain Scarlet dela Rhea-Castillejos in Iisa Pa Lamang in 2008 topbilled by Claudine Barretto, Gabby Concepcion and Diether Ocampo. Angelica is cast as Rubí Pérez de Ferrer, a woman driven by dark ambition that will be hindered by no one and nothing in getting what she wants—to escape from poverty and to live a wealthy life. "Yung ipagkatiwala sa 'yo ang isang soap na parang title role, bonggang-bongga na yun. Hinintay ko ang pagkakataon na 'to, ang maging bida sa isang soap. At ngayon, di lang bida, bida-kontrabida pa! Ano pang hahanapin mo?"

SECOND CHOICE TO PLAY RUBI. Members of the press pointed out that Angelica is the perfect actress to play Rubi because she effectively portrayed a role with the same nature in the teleserye Iisa Pa lamang as the villainess Scarlet. Butthe role of Rubi was not first offered to her. "Yes, hindi ako ang first choice. Alam ko maraming pinagpilian. Nung pumasok ang name ko, tumigil na sila," she said with a laugh mimicking Kris Aquino.

Angelica was the second choice after Kristine Hermosa declined the role since she deemed it "too daring."

While watching the original series, she got worried by the possibility that Filipino viewers might react negatively to her role since the Mexican version is daring. There were adjustments made to meet the taste of Pinoy viewers. "At first nakakatakot, siyempre iba kasi ang values nating mga Filipino. Mas nag-focus kami sa Filipino values. Pinaikot ang kuwento sa pamilya pero halos lahat naman na-retain," she explained.

Created by Televisa, Mexico and directed by Erick Salud and Don Cuaresma, Rubi will be shown on ABS-CBN Primetime Bida starting February 15, 2010.