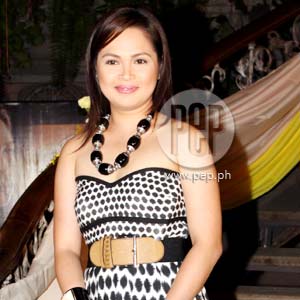 Judy Ann Santos and Derek Ramsay's latest primetime project, Habang May Buhay, is a tribute to the Filipino nursing community.

Judy Ann Santos has been married to Ryan Agoncillo for almost a year now but that does not mean that he has tightened his reins on his wife. When members of the press asked Juday if Ryan ever became jealous of her leading man Derek Ramsay, she denied that such an incident ever occurred.

For his part, model-turned-actor Derek Ramsay is more excited than nervous now that Habang May Buhay is finally being shown on primetime television especially since they have been working on it for several years now.

The Judy Ann Santos-starrer made its debut last Monday, February 1, as part of ABS-CBN's Primetime Bida roster of programs and has reportedly garnered a rating of 30.4 percent according to figures released by TNS.

ABS-CBN's evening lineup of shows has all been doing well in terms of viewership. Derek, however, refuses to regard this fact as additional pressure for him and his co-stars. He made this point very clearly last January 28 at the press launching of Century Tuna's Superbods Run held at the National Sports Grill in Greenbelt, Makati City.

"There's always pressure there but like what I've said I try to block that out," Derek told PEP (Philippine Entertainment Portal). "Ang ginagawa ko na lang nakikisama ako sa mga kasama ko to make a good project and I'm very proud with the amount of work that we put in."

The half-Filipino, half-British Derek is very particular in stating their desire to please the nursing community through the drama project.

"We don't want to disappoint them kasi para sa kanila din 'to. Alam ko I did my best and alam ko din na my co-workers did their best."


In a separate interview with Judy Ann Santos, the actress described how it was like to work with the likes of Derek Ramsay in a teleserye.

He also believes that the considerable time gap between production and actual exhibition will benefit the show and the actors involved. Aside from Judy Ann and Derek, Habang May Buhay is also bannered by Gina Alajar, John Arcilla, Tetchie Agbayani, and Gladys Reyes.

Aside from Derek, Juday will be partnered with other leading men namely Joem Bascon and Will Devaughn. When asked to describe her working experience with them, the Teleserye Queen shares, "Actually, in all fairness sa kanilang tatlo, napaka gentlemen nila, napaka professional nila sa set.