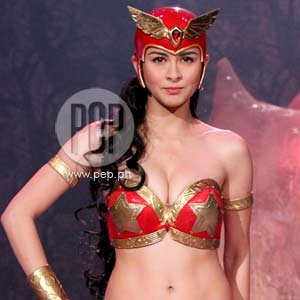 Marian Rivera's Darna posted a 32.5% average rating in January 2010. This was based on the data gathered by AGB Nielsen from Mega Manila coverage, which accounts for 55 percent of all television households in Urban Philippines.

GMA Network announced, through a statement sent to PEP (Philippine Entertainment Portal), that it has strengthened its lead in Mega Manila ratings over its rival network for the first month of 2010.

Based on the latest TV household population projections of AGB Nielsen, the expanded Mega Manila coverage accounts for 55 percent of all television households in Urban Philippines. Moreover, Mega Manila ratings are now being generated from a bigger panel of 800 TV households.

According to the Kapuso Network, its weekday primetime programs strengthened margins over competition, and contributed to its improved block lead in the first month of the year. For the period of January 25 to 29, the combined ratings of primetime programs 24 Oras, Darna, The Last Prince, Full House, StarStruck Shoutout and Queen Seon Deok generated a 2.0 point lead in the weekday evening ratings across Mega Manila households, with GMA-7 getting 25.6% over ABS-CBN's 23.6%.

With the launch of new programs to celebrate its 60th year, GMA Network expects to further widen its lead in the coming months.